Martial arts legend Jackie Chan has said he hopes Hong Kong "can return to peace soon" after finally breaking his silence on the protests that have rocked his home city.

The Drunken Master star said recent events in Hong Kong are "sad and depressing" in an interview with state-owned television network CGTN on Wednesday.

"When I saw on Weibo that CCTV had shown the 'The Five-starred Red Flag has 1.4 Billion flag guards', I came [here] immediately," Chan said.

"On the other hand, I wanted to express the most basic principles of patriotism as a Hong Kong citizen and a Chinese. I am a national flag guard. Furthermore, I wanted to go to this event to represent everyone's voice."

The Hong Kong-born actor is adored around the world for his famous kung fu films like the Rush Hour series, but his Beijing loyalist views and dismissals of the democracy movement have not endeared him to protesters. 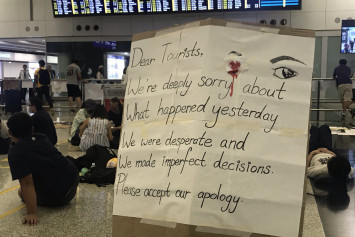 The 65-year-old is a member of the Chinese People's Political Consultative Conference. The legislative advisory body in Beijing is largely made up of members of the Chinese Communist Party.

"I have visited many countries, and I can say, our country has been rapidly developing in recent years. I feel pride in being Chinese wherever I go, and the 'Five-starred Red Flag' is respected everywhere around the world," Chan said.

"I also deeply feel that safety, stability, and peace are just like fresh air, you never know how precious it is until you lose it.

Chan's comments did not go down well with Hong Kong social media users, who angrily replied to a tweet by CGTN containing a video clip of his interview. 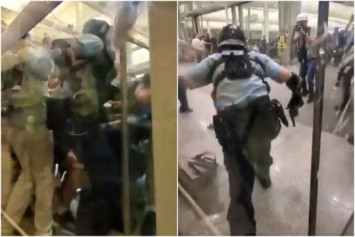 Another user wrote: "Oh good old Jackie Chan. How does the CCP pill taste like? Pretty sure you enjoyed it much eh?"

While his fellow Hong Kong martial arts icon Bruce Lee has become a symbol for young demonstrators in defiance of China's shelved extradition law, Chan feigned ignorance of their historic marches when asked in June.

"I only found out yesterday there was a big march in Hong Kong. I don't know anything about it," Chan had said during a trip to Taiwan to promote his new album, despite images of two million marchers being widely disseminated around the world.

Chan also attracted criticism in 2009 for his comments on the pro-democracy movement. "I'm not sure if it's good to have freedom or not," he said at the time. "I'm really confused now. If you're too free, you're like the way Hong Kong is now. It's very chaotic. Taiwan is also very chaotic."