Labourers move stones to reinforce one of the city's many canals to help prevent flooding in central Jakarta, on Oct 28, 2014.

High concentrations of the drug paracetamol have been found in the waters off the northern part of Indonesia's capital, according to a recent study, raising concerns about risks to the environment from improper waste management.

The study, which involved seawater samples taken from four different sites in the effluent-riddled Jakarta Bay as well as a site off the coast of Central Java, was published in the online journal Science Direct in August. It is the first to report the presence of paracetamol in Indonesia's coastal waters.

"The [findings] raise concerns about the environmental risks associated with long-term exposure and, especially, the impact on nearby shellfish farms," researchers from the University of Brighton and the Indonesian Institute of Sciences wrote.

"The study found that the quality of the water in Jakarta Bay did not meet the Indonesian Standard Quality of Seawater limits, and some metals were also present."

Research on the effects of paracetamol on marine life has shown that the drug can cause oxidative stress in shellfish and affect feeding patterns, Wulan Koagouw, one of the study's co-authors, said.

It can also lead to endocrine disruption and hepatotoxicity in male fish and affect embryonic development and locomotor behaviour in larvae and fish embryos, she added.

Their work detected high concentrations of paracetamol at two locations in Jakarta Bay, namely at Angke, where samples showed 610 nanograms (ng/L) of paracetamol per litre, and Ancol, which showed 420 ng/L.

"The finding of paracetamol content in coastal waters indicates that waste management is still poor, including the monitoring of industrial, pharmaceutical, hospital, and household waste in Indonesia, including in Jakarta and the surrounding provinces," said Arifsyah Nasution, a campaigner for Greenpeace Indonesia.

He added that Greenpeace suspected the paracetamol came from various sources such as industrial waste disposal, especially from the pharmaceutical industry for the production of medicine; hospital waste; and from community consumption on a household scale.

Jakarta Bay, located in the north of the Indonesian capital city, is the confluence of 13 rivers. The area is known for its economic disparity, as most of its residents live below the poverty line, and poor sanitation and widespread pollution are rife as a result of waste water and pollution from factories.

In 2019, three tonnes of green mussels were released into the bay in an effort to clean the rancid waters.

Medical waste that is improperly disposed of in waterways or landfills is common in Indonesia, and this problem has only worsened during the Covid-19 pandemic, according to Muhammad Reza Cordova, a researcher at the Research Centre for Oceanography.

"Actually, it is not too surprising to find paracetamol in the water samples," said Cordova, who has also studied the increase in plastic personal protection equipment (PPE) waste. "But it is a bit surprising when compared to other similar research globally, as the numbers are relatively high."

According to his research, PPE debris at two outlets on the Cilincing and Marunda rivers increased by 5 per cent in March and April last year compared with the same period in 2016.

"The management of medical waste and PPE is still not optimal, and there are still few waste management companies in Indonesia," he said.

According to Nasution of Greenpeace, further studies need to be carried out by the regional and national governments to identify the main source of paracetamol pollution in Jakarta Bay, as well as in the main rivers that flow into the bay - which is also one of the conclusions of the study.

He added that the authorities also needed to better monitor the production and distribution of drugs in Indonesia, and recommended that paracetamol content be used as a standard parameter to be measured in Indonesian rivers and coastal areas considering the widespread use and consumption of the medication.

Jakarta's Environmental Agency said it had already begun to follow up on the study's results. 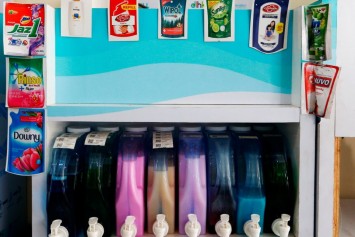 "Sampling is being carried out to find out whether the pollution is still ongoing, and to try to identify its source. So steps will be taken to stop the pollution," agency head Syaripudin said in a written statement on Oct 3.

While the results of the study may be shocking to some, researchers are optimistic that the data could pave the way for future improvements.

"The results of our research are expected to be the basis for consideration in policymaking, in this case, to make regulations that are implemented and implemented optimally," said Cordova from the Research Center for Oceanography. "It will be positive if the discovery of paracetamol waste in the environment becomes the foundation for better waste management in the future."

Researcher Koagouw said it would open the doors to campaigning for the right way to sort and handle unused or expired drugs; strengthening community and industrial waste management systems and monitoring; tighter supervision for the handling of hazardous waste and emerging contaminants; as well as strengthening research in the field of ecotoxicology of emerging contaminants as a scientific basis for making policies or regulations.

While the effect of paracetamol in Indonesia's waterways on humans is likely to be minimal given its widespread use as a headache, fever and pain relief medicine, Koagouw pointed out that the surrounding wildlife such as shellfish might be most affected by the pollution - which would have a knock-on effect on the ecosystem.

"When the level of a substance reaches a level that can interact with biological systems of living things besides humans, that is when the substance has the potential to produce harmful effects," she said.

This article is first published in South China Morning Post.