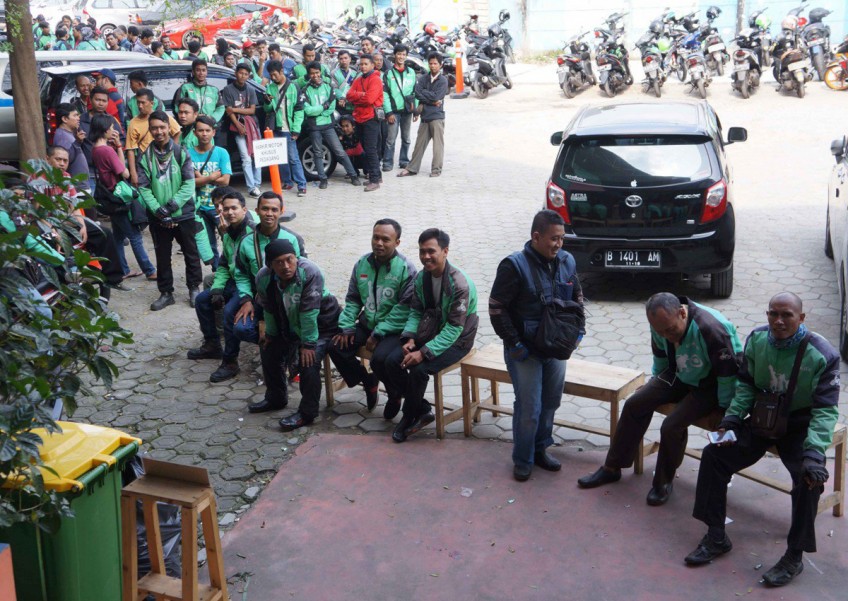 A long queue of Go-Jek drivers wait for Tuku coffee at the Pasar Santa branch in South Jakarta on July 4. Each person waits from one to two hours to place an order during peak hours. Tuku has been gaining popularity through its convenient delivery partnership with Go-Jek and customers are willing to wait despite the long lines.
The Jakarta Post/Asia News Network

After two hours of waiting in Jakarta's sweltering afternoon heat, it was finally Andi's turn to place an order at the coffee shop's counter.

In his job as a driver for ride-hailing app Go-Jek, the 32-year-old's second trip to Pasar Santa complex in South Jakarta on a Tuesday was to specifically fill orders made with the Go-Food app.

"I've probably spent about four hours of my day here today since I had to wait in line for about two hours each time," Andi told The Jakarta Post after placing his order of es kopi susu tetangga (neighbour's iced coffee milk) at Tuku.

A cup of its signature es kopi susu tetangga, a mix of freshly brewed coffee, milk and palm sugar, is priced at Rp 18,000 (US$1.35). The prices of other drinks on the menu range from Rp 15,000, such as for a short cold brew, to Rp 34,000 for an iced caramel macchiato, plus a delivery fee that would depend on the distance of the destination.

"But it's almost always es kopi susu tetangga. Orders usually come from people who work in offices, with the busiest hours just prior and during lunch time," Suriwiyanti said, who was also on her second trip of the day.

Despite the long lines, the 41-year-old woman said the friendly atmosphere makes it bearable, as other drivers are courteous during the wait -- not that she has to wait long anyhow.

Suriwiyanti, who is the one of a handful of female Go-Jek drivers among the dozens of people waiting in line, said her male counterparts allow women to skip the long stretch of the single-filed queue for "online orders" and join the "regular order" -- a significantly shorter line with only several people at a time.

Another regular customer, 24-year-old Karina Nadila, said she had stopped by after a skin care appointment in a nearby building. Enthusiastically anticipating her iced drink, Karina said she often drank Tuku coffee.

"I like to add milk to my coffee as I don't like black coffee, but I think people generally like it so much because while it is rich in flavor, it's not overly powerful," Karina said, adding that the palm sugar also makes a tasty healthier alternative to white sugar.

Noticing the crowd, Karina speculated on whether the particularly long line could have been caused by President Joko "Jokowi" Widodo and his family's recent visit to the chain's Cipete branch on Sunday, adding that it has created more publicity for the already popular brand.

Jokowi, along with First Lady Iriana and two of their children, Kaesang Pangarep and Kahiyang Ayu, had dropped by the original store located on Jl. Cipete Raya.

Jokowi sipped on hot coffee while speaking to owner Andanu Prasetyo. The President, who had a background in business prior to entering politics, had expressed full support for the development of local brands and for nurturing local entrepreneurs.

In a telephone interview, Andanu said he never particularly aimed for high popularity in developing his company.

In creating a takeaway-only concept, Andanu said he only wanted to bring back a simple coffee experience, reclaiming it from the excessive lifestyle lately associated with drinking coffee.

Established in June 2015, each branch now sells approximately 1,000 cups a day, he said, using coffee beans from across Indonesia, including Aceh, Bali and Flores in East Nusa Tenggara.

"I honestly don't really know what makes it so special as the customers I've spoken to would have their own perception of 'special.' I really only created Tuku as a neighborhood coffee shop," Andanu said.