JAL and ANA in dogfight over Haneda landing slots 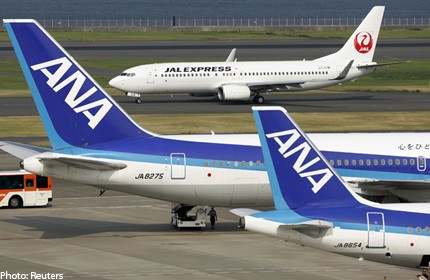 The two carriers have locked horns for decades at home, but this clash threatens to take on an international dimension by embroiling British Airways and other foreign carriers.

At issue are 20 new landing slots at Haneda, the world's fourth busiest airport, which according to industry experts, can generate around US$20 million each in annual operating profit.

With no new runways or airports planned for Japan's capital, the October ruling will likely be the last major slot distribution in Tokyo for years and could give one of the two carriers a competitive edge.

Aviation regulators will decide who gets the slots by October. Normally the allotment, available after the opening of a new runway, would be split down the middle, but ANA argues it deserves the lot. Getting them all would for the first time make it Japan's biggest international carrier.

ANA, already the nation's biggest carrier by revenue and fleet size, is miffed a Democrat government in 2010 used 350 billion yen (S$4.58 billion) of taxpayer money to bail out a bankrupt JAL and says now it is payback-time for the helping hand given to its rival.

"We are not on an equal footing, the revival of JAL went too far," ANA Group CEO Shinichiro Ito said at his company's annual shareholder gathering in Tokyo in June. "ANA deserves all the slots."

Prime Minister Shinzo Abe's Liberal Democratic Party, in opposition at the time of the JAL rescue, is cocking a sympathetic ear.

"JAL should have revived by itself without public money," Norio Mitsuya, an LDP lawmaker closely involved with formulating aviation policy for his party told Reuters in an interview.

"Having much of its debt waived has made things easier for JAL, while ANA is left with its credit burden. It was too much."

Once Asia's biggest carrier, JAL's demise was spectacular, its market value at one point being worth less than a single Boeing 747 jumbo jet.

The reason given for the government bailout was to protect the country's air services, but the reality was that JAL had slashed 42 domestic routes, said Mitsuya, who was a senior aviation bureau official before joining parliament.

Those route cuts were needed to stem losses says JAL, which also laid off 21,000 people, or 40 percent of its workforce, slashed salaries by a fifth and pension payouts for retired workers by almost a third.

"JAL's revival, including asset reductions, layoffs, debt waivers, pension cuts, fleet and route cuts was done under the guidance of the bankruptcy courts," said Hideki Togasaka an official on the policy research committee of the Democratic Party of Japan, which Abe's government ousted last year.

The political cold shoulder from the current administration, nonetheless, has left JAL and its Oneworld airline alliance partners worried.

"Our rehabilitation was very successful and that is apparently something that ANA has not been happy about," a JAL official told Reuters on condition he wasn't identified because of the sensitivity of the issue.

"If you are trying to promote fair competition, the way is not to shackle a company and its profitability," he added.

JAL insists its bankruptcy was by the book with no preferential treatment. Tax breaks allowing it to carry forward losses to trim future tax bills are, it argues, used by other corporations.

"For the past five years we have paid more taxes than ANA," said the JAL official.

The airline points to a 283 billion yen profit it delivered to the taxpayer in 2012, when the carrier relisted and the government sold its stake.

For these reasons, JAL deserves to get 10 new slots in October, the official said.

In their most recent business quarter to June 30, JAL made a net operating profit of 22 billion yen, while ANA posted a 5.6 billion yen operating loss.

War of the worlds

As the slot decision looms, ANA has gone on the warpath.

A manager at ANA, who asked to remain anonymous because he wasn't authorised to speak to the media, likened JAL to an insolvent homeowner who has had his mortgage paid off and is then given income-boosting tax breaks.

It means, he said, that JAL is able to deploy greater financial resources than ANA in any strategic price war between the two carriers, ranked Asia's two biggest by revenue.

The argument that may weigh most with aviation regulators and policymakers sympathetic to ANA's claim of unfair treatment is that cutting JAL out of the lucrative route expansion will also hurt British Airways, American Airlines and other members of the Oneworld carrier alliance, and in doing so fan the local battle into an international conflict.

Giving all 20 landing rights to ANA would give Star Alliance a 50 percent share of international flights from Haneda against only 20 percent for Oneworld, says JAL.

"Haneda is right at the top of every ranking," said Bruce Ashby, CEO of Oneworld.

Every year around 65 million passengers use the airport. Any decision that favours ANA "will further the gap" with Star Alliance, Ashby added.

"Anything that impacts on JAL as an important partner of British Airways and Oneworld is something we clearly take a lot of interest in," Willie Walsh, the CEO of BA's holding company International Consolidated Airlines Group, told Reuters in a phone interview.

"I think everybody would like to see a more transparent system in place. The perception exists that there can be political influence and certainly looking at it from a distance I think that is the concern people could have."

ANA's boss, Shinichiro Ito, says the battlelines are drawn and he has no intention of backing down.

"I have nothing against JAL and it put a lot of effort into turning itself around, but the way it was saved was not right," he told reporters in Tokyo this month. "The Haneda slot distribution can go some way to fixing the skewed competitive environment."