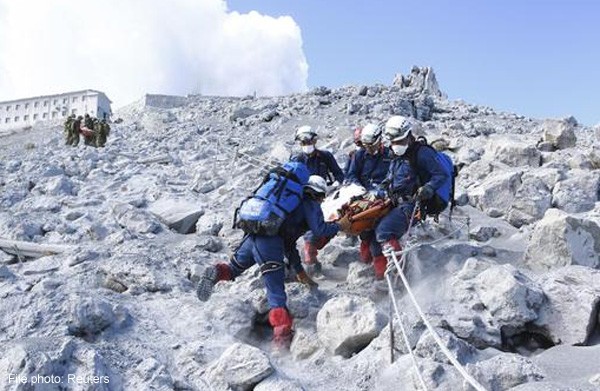 TOKYO - Japanese search teams returned to the peak of a volcano Wednesday for the first time in eight months to look for the bodies of six climbers still missing after an eruption that killed dozens.

Around 50 people, including police, firefighters and volcanologists, began an exploratory ascent of Mount Ontake in central Nagano prefecture with a view to resuming a full-scale search next month, after the rainy season.

The 3,067 metre (10,121 feet) Mount Ontake was packed with hikers out to see the region's spectacular autumn colours when it burst unexpectedly to life on September 27 last year.

The shock eruption was Japan's deadliest for almost 90 years, leaving an estimated 63 people dead, many of their bodies at least partially entombed in volcanic sludge.

Dramatic mobile phone footage showed hails of rock raining down as clouds of ash and smoke engulfed walkers on the volcano, which has long been popular among casual hikers.

The operation was suspended in October as autumn's rains began to give way to snow, which soon made the peak impassable.

"There is a part of me that feels rather worried about what it is like up there" around the summit, Noriyuki Hayashi, senior officer at Nagano prefecture police, told journalists Wednesday as the team prepared ascend Mount Ontake.

"But we will do what we can." The team observed a moment of silence in front of the mountain, which - even in the summer months of June - still has snow-covered ravines.

Aerial footage showed the searchers' bright outerwear against the grey lunar landscape of the ash-covered peak.

Ontake is one of scores of active volcanoes in Japan, which sits on the so-called "Ring of Fire", where a large proportion of the world's quakes and eruptions are recorded.

Autopsies on bodies recovered from Ontake last year revealed many of them died from injuries caused by flying rocks.

That led to a recommendation in March that people who climb Mount Fuji - also a volcano - should carry helmets and goggles with them.