Japan has launched its first dedicated submarine-hunting warship in nearly 30 years, with Tokyo concerned primarily with monitoring Chinese submarines operating close to and within its waters, while also keeping an eye on North Korea's submersibles.

The twin-hulled ship, named Aki, was unveiled by the Japan Maritime Self-Defence Force (JMSDF) at a launch ceremony on January 15 at Mitsui Engineering & Shipbuilding's facilities in Okayama Prefecture, central Japan. It is currently being fitted out before it can start sea trials.

The Aki, which weighs 3,048 tons, is the third in the JMSDF's Hibiki class of ocean surveillance vessels, but the first since its sister ship was launched in 1992.

It is due to be deployed to the JMSDF's base in the city of Kure in Hiroshima Prefecture next spring.

"Of those two potential threats, China is by far the biggest. Beijing has developed a great deal of asymmetric capabilities to keep the US out of the 'first island chain' and even the 'second island chain'," he said, referring to the land masses that have to date served to hem Chinese maritime forces in, but at the same time, keep foreign forces away from the Chinese coastline.

The Japanese archipelago, Taiwan and the Philippines act as the first natural barrier, with US-controlled Guam, Saipan and other Pacific islands serving as a secondary barrier.

China has in recent years invested heavily in developing its submarine fleet and its underwater drone capabilities. It has also been probing the defences of neighbouring countries, such as Japan, to determine their capabilities.

A third priority has been to chart the seabed in surrounding waters and to identify deepwater channels that could be used by submarines to transit into the deeper waters of the Pacific Ocean with a reduced likelihood of being detected.

ALSO READ: Japan and the launch of Maritime Asia

On several occasions in recent years, Japanese forces have located unidentified submarines within its territorial waters and tracked their movements.

Tokyo has consistently declined to confirm the nationality of the vessels, most frequently seen in waters off Okinawa Prefecture in the far south and close to the strategic Miyako Strait into the Pacific, but the assumption has been that they are Chinese.

According to the latest estimate of Beijing's defence capabilities, military database Jane's Yearbook believes that China is able to deploy 69 submarines. 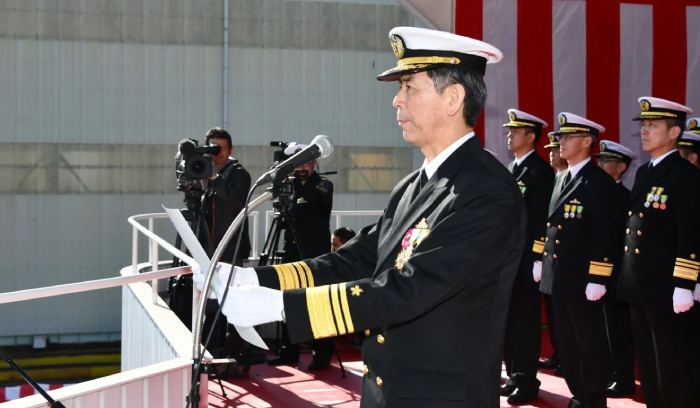 The Aki is named and launched at a ceremony in Okayama Prefecture on January 15, 2020. PHOTO: Twitter/JMSDF_pao_eng

"Japan already has two of this class of surveillance vessels, but clearly the government does not think that is sufficient to adequately monitor the movements of Chinese submarines," said an official from Japan's National Institute of Defence Studies who declined to be named.

"The basic design of this newest ship is similar to that of the early vessels, but those have been upgraded with the latest technology, giving Japan a good capability in this area," the official said.

The 67-metre Aki, which costs 22.6 billion yen (S$305 million), is fitted with the US-developed Surveillance Towed Array Sensor System (SURTASS), which obtains and provides information to the undersea surveillance network deployed by the US to track the movement of foreign submarines.

By unreeling a sensor for several kilometres behind the vessel, the Aki will be able to gather the sounds made by submarines that are hundreds of kilometres away.

The sounds it collects, such as propeller revolutions, will be digitised, added to the main database and used to identify the model and nationality of the submarine. 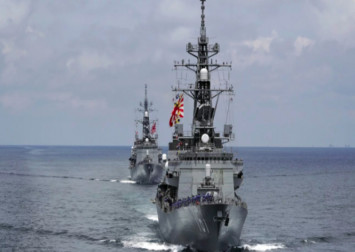 Although the Aki is expected to be primarily deployed around the islands of the southern Okinawa Prefecture, Nagy says Tokyo is keeping a close eye on North Korea's development of a platform for the submarine-launched ballistic missiles (SLBM) that it has already test-launched on a number of occasions.

Satellite images have captured developments at the Sinpo South Shipyard, on the east coast, that have included the construction of a covered fabrication hall and a submarine concealed by roofing alongside a pier.

"China may be the main concern, but North Korea is clearly developing some diesel submarine technology as it tries to get a SLBM-capable vessel launched," said Nagy.

"Japan absolutely wants to keep abreast of developments in that project."