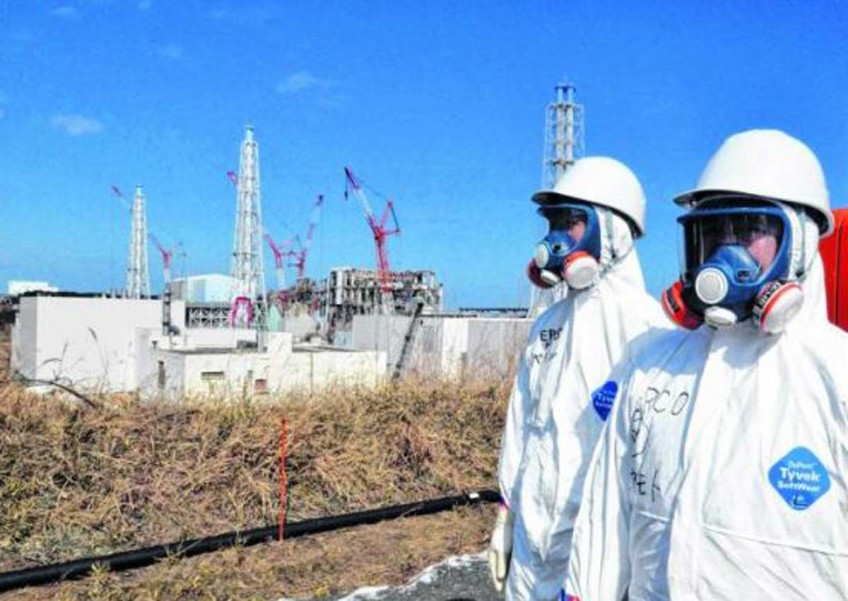 'TIP OF THE ICEBERG': Tepco workers standing in front of the Fukushima nuclear power plant on Feb 28, 2012. A Japanese health ministry official said that a man developed leukaemia after he was hired to install covers at the crippled plant to prevent further dispersal of radioactive materials
AFP

A man who worked at Japan's Fukushima nuclear plant following the 2011 reactor meltdowns has been diagnosed with cancer, the first confirmed case linked to the radiation, triggering fear that it could be just the "tip of the iceberg", media reported.

A health ministry official said yesterday that the man, 41, who is unnamed, developed leukaemia after he was hired to install covers at the crippled plant to prevent further dispersal of radioactive materials between Oct 2012 and Dec 2013, Kyodo news agency reported.

Yesterday's announcement will likely inflame widespread opposition to nuclear power in Japan and could frustrate efforts to resettle evacuees around the plant, which has been certified safe, said Agence France-Presse (AFP).

The news also came less than a week after the controversial restart of a second reactor in Japan, which had been shut down with all reactors in the wake of the crisis.

Said the health ministry official at a press briefing in Tokyo: "This person went to see a doctor because he was not feeling well. That was when he was diagnosed with leukaemia."

Kyodo News quoted the official as saying: "While the causal link between his exposure to radiation and his illness is unclear, we certified his case (as such) from the standpoint of worker compensation."

The man, who wore protective equipment during his work at Fukushima, will receive compensation for his medical costs and lost income.

Three similar cases of cancer in plant workers are still awaiting confirmation of links to the incident.

Shinzo Kimura, associate professor of radiation and hygiene at Dokkyo Medical University, told AFP: "This is a landmark decision from the viewpoint of workers' rights, and it's probably just the tip of the iceberg."

The man was thought to have been exposed to a "relatively low" amount of radiation - less than what Tokyo has deemed as a safe level for Fukushima residents to move back to their homes, the expert said.

According to environment organisation Greenpeace, yesterday's announcement comes as a massive blow to the International Atomic Energy Agency, which stated last month that no discernible health problems are expected to be linked to the Fukushima radiation.

Public broadcaster NHK said about 45,000 people have worked at the plant since the 2011 disaster as part of a massive clean-up effort.

About 7,000 contract workers and employees of Tokyo Electric (Tepco), which runs the plant, are at the site on any given weekday, Bloomberg reported, quoting Tepco.

No deaths have been directly attributed to the radiation released during the 2011 disaster.

The sea waves swamped cooling systems at the Fukushima plant, sending some reactors into meltdown.

Radiation was released into the air, sea and food chain in the worst nuclear accident since the 1986 Chernobyl disaster.