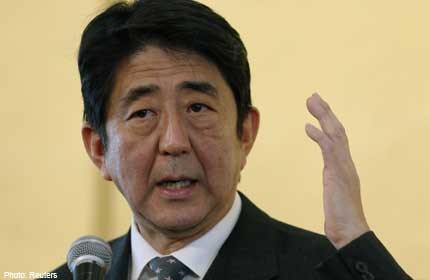 JAPAN - Prime Minister Shinzo Abe plans to put together Japan's first-ever national security strategy by the end of the year.

The strategy, which will cover roughly five to 10 years, is modelled on a similar document put out by each new United States administration to tell Americans and the world what policies it intends to take.

The Abe administration's proposed national security strategy will cover not only defence, but also other fields such as the economy, energy, resources and information technology. A panel of experts is to be set up early next month to compile recommendations for the Cabinet.

Such a vehicle will put the formulation and coordination of foreign and security policies firmly in the hands of the administration rather than respective ministries.

Japan's need for a national security strategy comes against the backdrop of a worsening security environment, in particular North Korea's nuclear and missile threats and China's increasing naval activities in the region.

The move is believed to be also aimed in part at giving momentum to Mr Abe's goal of adding collective self-defence to the role of the Self-Defence Force (SDF), Japan's de facto military.

Traditionally, Japanese governments have interpreted the country's war-renouncing Constitution as only allowing Japan to defend itself if attacked.

Under the current interpretation, the SDF is not allowed to go to the aid of another country, including its security ally, the US. Mr Abe wants to change that through a revision of the interpretation.

The planned nomination of political science professor Shinichi Kitaoka to the national security strategy panel would attest to the Prime Minister's intentions.

In an interview with local media earlier this month, he disclosed that his panel will recommend to the government that the SDF should be authorised to go to the aid of partners "with close ties to Japan security-wise", paving the way for Japan to help a third country other than the US.

A panel set up during Mr Abe's first stint as premier from 2006 to 2007 only considered allowing the SDF to exercise the right of collective self-defence in the event that the US was in trouble. Its proposal was never implemented.

As if to make doubly sure his goal will be attained, Mr Abe has also taken the unprecedented step of appointing a senior diplomat known to endorse the notion of collective self-defence to be head of the Cabinet Legislation Bureau.

The bureau, which counsels the Cabinet on legal matters, has traditionally opposed the reinterpretation of the Constitution.

Mr Tsuneyuki Yamamoto, who was replaced as head of the bureau and made a Supreme Court judge, told reporters that any move to reinterpret the Constitution was misguided.

"It would be more appropriate to revise Article 9 instead. Ultimately, parliament and the people will have to decide," he said, referring to the clause which states that "the Japanese people forever renounce war as a sovereign right of the nation and the threat or use of force as means of settling international disputes".