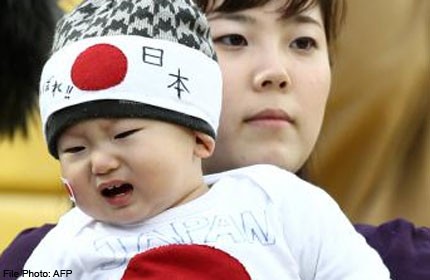 JAPAN - The government plans to allocate ¥300 billion (S$3.8 billion) to child-rearing support measures when it beefs up the nation's social security system with a consumption tax rate increase next year, it has been learned.

The government estimates increases in tax revenues with the April consumption tax rate hike to 8 per cent will amount to ¥5.1 trillion in fiscal 2014. Of it, ¥4.6 trillion will be allocated to measures to sustain the existing social security programs, such as pensions and medical services. The remaining ¥500 billion will be used for new measures to enhance the system, according to sources.

The child-rearing support measures will include increasing certified day care centers by helping small-scale day care centers obtain public authorisation, a government draft shows. The ¥300 billion allotment also includes measures to expand the capacity of children's institutions to accept children who have been abused or need special protection for other reasons.

Another ¥100 billion will be assigned to improving medical and nursing care services, including home care. In this category, the government hopes that there will be more effective role-sharing among hospitals to treat patients in accordance with their conditions from the acute phase of their disease to recovery. The government also intends to implement measures to strengthen ties between medical institutions and nursing care facilities.

As for the system to curb patients' out-of-pocket payments for expensive medical treatment, the government is set to review the current system to lower the upper limit of such payments for certain groups of people from January 2015. The government is considering lowering the upper limit by 30 per cent to ¥57,600 per month for people under the age of 70 who have an annual income of ¥2.1 million or more, but less than ¥3.7 million.

Another ¥30 billion will likely be allocated, beginning January 2015, to reducing prefectural governments' burdens in supporting medical services for patients with intractable diseases.

Of the ¥4.6 trillion to sustain the existing social security system, ¥2.95 trillion will be set aside for the redemption of so-called bridge bonds used to fill up the shortage in fiscal resources for basic pension benefit payments for fiscal 2012 and 2013. The government intends to spend ¥1.45 trillion for increasing social security spending associated with the further aging of society and ¥200 billion in additional spending toward medical services to cope with increases in prices of medical devices and other costs due to the consumption tax rate hike.