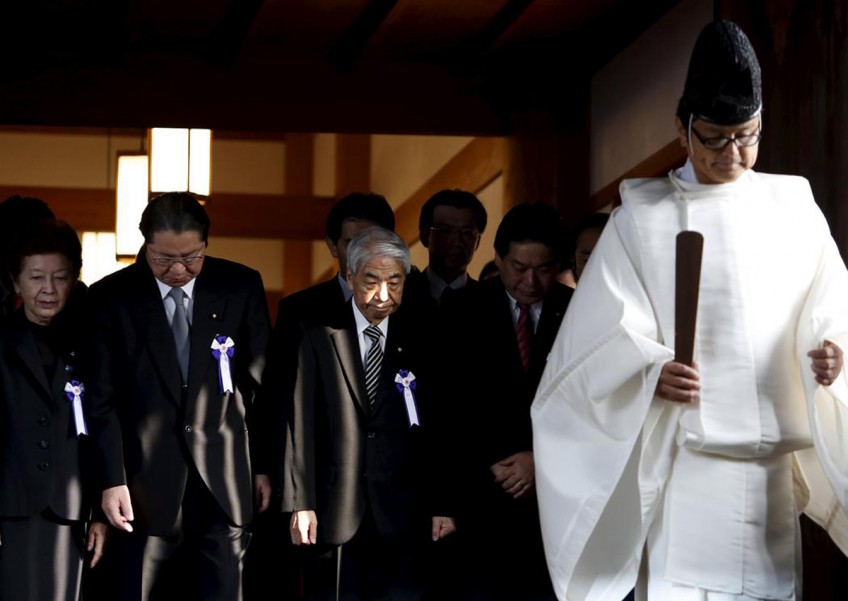 TOKYO - Scores of Japanese lawmakers visited Tokyo's Yasukuni war shrine on Tuesday in a move that could anger China and South Korea, which see it as a symbol of Tokyo's militarist past.

The group of 73 politicians and 96 representatives of other lawmakers came to the leafy shrine to mark the autumn festival, ahead of trilateral talks among China, Japan and South Korea expected in two weeks' time.

The visit came after two cabinet ministers paid homage on Sunday, while Prime Minister Shinzo Abe, a passionate supporter of the shrine, made a ritual offering on Saturday.

Abe himself is not expected to visit the shrine this time.

The conservative leader is due to hold talks next month with the leaders of China and South Korea, the countries that bore the brunt of Japanese military aggression in the 20th century.

He is also expected to hold his first official bilateral meeting with South Korean President Park Geun-Hye on the sidelines of the three-way summit, as well as his third bilateral face-to-face with Chinese President Xi Jinping.

Visits there by senior Japanese politicians routinely draw an angry reaction from Beijing and Seoul.

Hidehisa Otsuji, a former health minister who led Tuesday's shrine visit, said he was not immediately aware whether any cabinet ministers or their representatives joined the group.

"With the (parliament) session being closed, the group was smaller this time. Still, we prayed and paid our sincere respects" at the shrine, Otsuji told a press conference after the visit.

He said he hoped Abe would visit the shinto sanctuary himself.

"I feel that it wouldn't be so bad if he visits the shrine once in a while, but the decision is up to the prime minister," he said.

Abe has visited the shrine once during his time in office, in December 2013. That sparked anger among Japan's neighbours and a diplomatic slap on the wrist from the United States, which said it was "disappointed".

On Sunday, Sanae Takaichi, the internal affairs minister and a close associate of Abe, and Justice Minister Mitsuhide Iwaki visited the Yasukuni shrine.