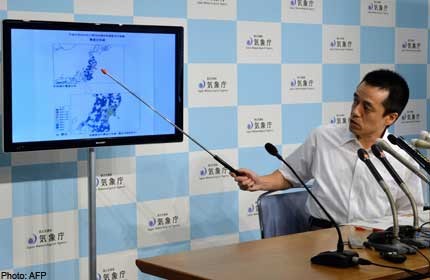 Japan Meteorological Agency officer Yohei Hsegawa speaks about an earthquake at the agency in Tokyo on August 4, 2013

JAPAN - The Japan Meteorological Agency has apologised for issuing a mistaken alert that a massive earthquake would hit Nara and Osaka prefectures with an intensity between lower 6 and 7 on the Japanese seismic scale.

The agency admitted Thursday that the earthquake early warning had been in error and apologised at a press conference for causing trouble over a wide area.

However, the actual quake was small at magnitude-2.3 and centred in northern Wakayama Prefecture.

No quake of even a 1 on the Japanese scale was registered anywhere in the nation.

Early warnings are automatically issued by a quake observation device when it estimates a quake of at least lower 5 has occurred or is under way after observing seismic waves at two or more locations.

According to the agency's observation, the epicenter of the actual quake was about 10 kilometers underground in northern Wakayama Prefecture.

The device also observed at the same time a small tremor that was not a seismic wave about 60 kilometers off the coast of southeastern Wakayama Prefecture. However, the device deemed the latter to be a seismic wave.

Since this small tremor was observed at the same time as a minor quake in the prefecture, the device concluded there was a large quake and issued the warning for Tokyo and 33 prefectures from the Kanto and Koshin region to Kyushu, where it predicted a shaking of 4 on the Japanese scale or larger.

Of the 137 early warnings issued since the system's launch, 33 cases ultimately involved quakes with intensities of 2 or smaller on the Japanese scale.

"If such [false] warnings continue, the early warning system will lose the public's trust. We'll do our utmost to prevent recurrences, so please take steps to secure your safety when a warning is issued," said Toshihiko Hashida, head of the agency's Seismological and Volcanological Department.