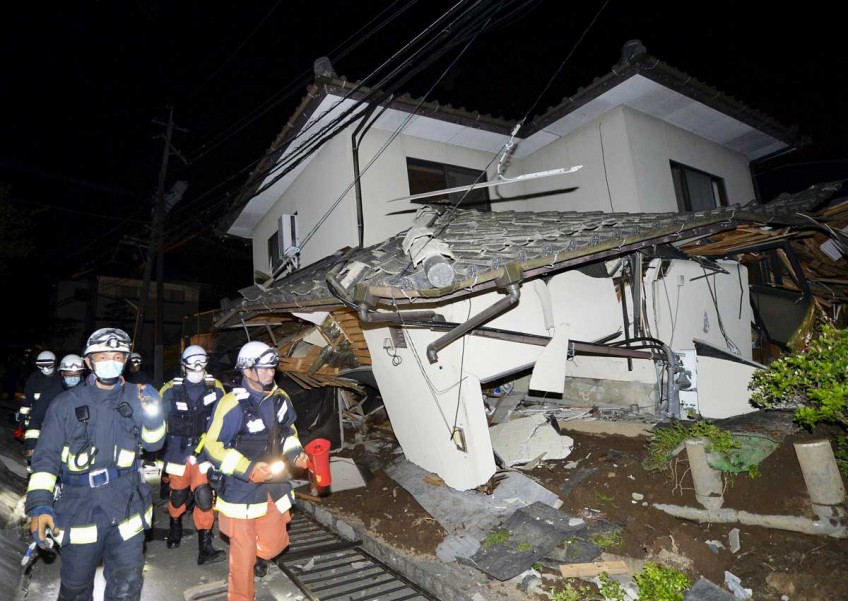 An aerial view shows damaged houses in the town of Mashiki in Kumamoto prefecture.
Reuters

JAPAN - Japan has resorted to opening a prison to those left homeless by two deadly earthquakes, officials said Tuesday, highlighting the challenges of dealing with tens of thousands who have fled their homes.

Two major earthquakes and about 600 smaller tremors have rocked the southwestern island of Kyushu since late Thursday, leaving a total of 46 people dead and more than 1,000 injured - 208 of them seriously - in Japan's worst humanitarian disaster in five years.

Many who abandoned their damaged or destroyed homes have had to sleep in temporary accommodation, huddle in makeshift shelters or even sleep in their cars, and local media have reported problems in delivering food and other essentials as well as raising health concerns.

More than 95,000 people were still in evacuation shelters, a spokeswoman for the Kumamoto prefectural government, told AFP, about 20,000 less than earlier in the day. The figure does not include those staying with friends or family or in places other than official shelters.

Justice Ministry official Koichi Shima told AFP that a prison in the hard-hit city of Kumamoto has accommodated as many as 250 people at a time in the correctional facility's martial arts training hall.

About 110 people were staying there on Tuesday alongside nearly 500 inmates, he added.

The ministry decided to start using prison facilities as evacuation centres after a huge undersea quake in March 2011 killed around 18,500 people when it sent a devastating tsunami barrelling into the northeast coast, sparking a nuclear meltdown disaster.

"This is the first time that the policy has been put into practice," Shima said.

An initial quake on Thursday, measured at 6.2 magnitude by US geologists, affected older buildings and killed nine people. But Saturday's more powerful 7.0-magnitude tremor and an ensuing landslide brought even newer structures crashing down.

More than 600 quakes and aftershocks have been recorded in the area since Thursday, according to the Japan Meteorological Agency, and they continued Tuesday.

Officials said that the death toll from the quakes rose to 46 as two more bodies were recovered, while the number of missing remained at eight as the bodies had yet to be identified.

Many people are avoiding the congested shelters set up in local schools and town hall buildings, choosing instead to stay in their cars, fanning worries about deep-vein thrombosis - also known as economy-class syndrome.

Prolonged immobility can lead to blood clots forming in the legs and travelling to the heart, lungs or brain with potentially fatal consequences.

Jiji Press reported that a 51-year-old woman in Kumamoto had died from the condition, though the prefectural government could not confirm the cause of death. Other reports said five people had been diagnosed with clots.

The prefecture has urged evacuees to avoid positions of prolonged immobility, encouraging them to take precautions such as walking around and drinking water.

Japan is one of the world's most seismically active countries, sitting on the so-called "Ring of Fire" around the Pacific tectonic plate.