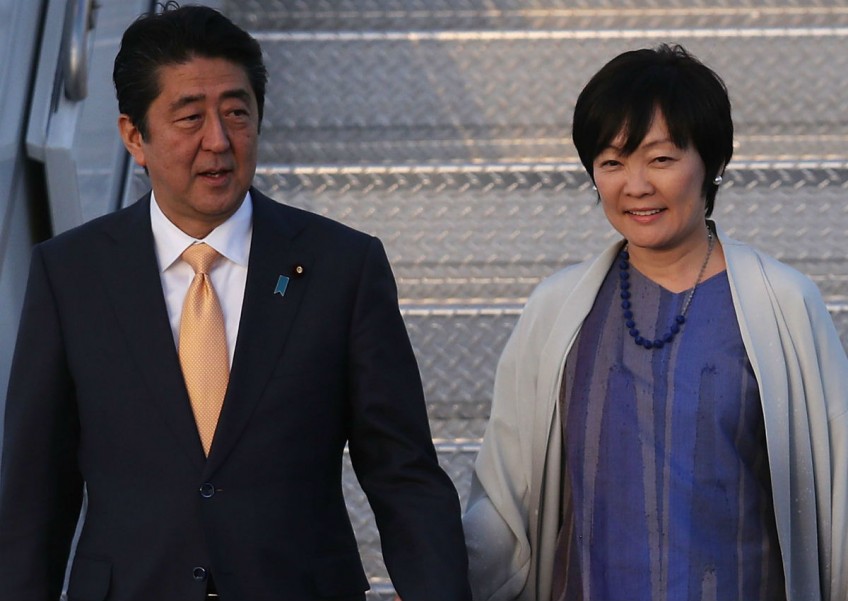 Japanese Prime Minister Shinzo Abe repeated denials on Friday that he or his wife had made donations to the head of a Japanese nationalist school at the heart of a political scandal that is chipping away at Abe's support.

School principal Yasunori Kagoike said on Thursday he had received 1 million yen (S$12,582) in an envelope from Abe's wife, Akie, on behalf of her husband.

Kagoike's educational group, Moritomo Gakuen, is at the centre of controversy over a land deal in which the school bought property for a fraction of the appraisal price. Officials say the discount reflected cleanup costs.

Abe's wife denied making the donation on her Facebook page late on Thursday, but Japan's largest opposition party has demanded her sworn testimony in parliament.

Akie Abe had been set to become the honorary principal of the school, which was to open in April with a curriculum based on pre-war patriotism, but cut her ties after the scandal broke. Moritomo also runs a kindergarten with a similar curriculum.

Prime Minister Abe has said he would resign if evidence was found that he or his wife intervened in the land deal or helped the school get accredited.

When asked about the deal, Kagoike said on Thursday he believed that "political involvement" contributed to the acquisition of the land.

Abe's support fell 10 points to a still-robust 56 percent in a Yomiuri newspaper poll published this week.

Japan's benchmark stock index was higher on Friday morning after briefly falling to a 1 1/2-month low amid some concerns about the controversy.