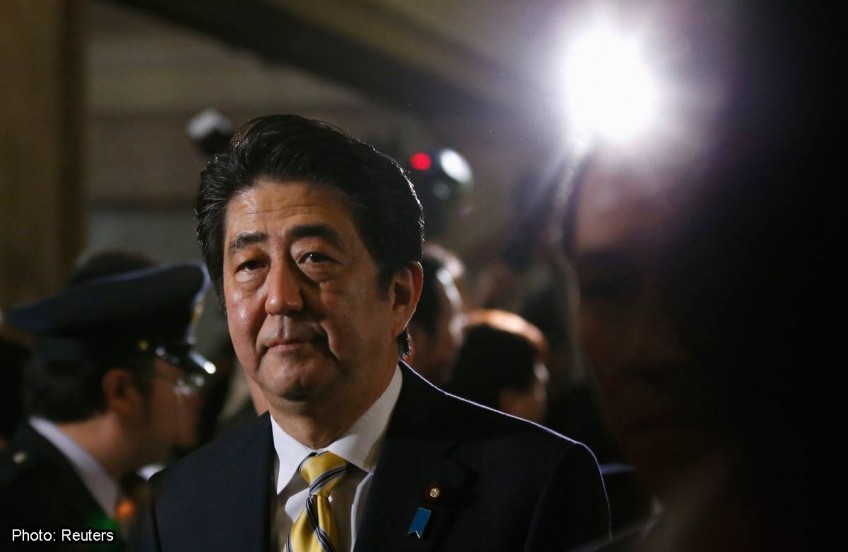 TOKYO - Japan's prime minister is set to rebuff a prickly invitation to a Chinese military parade, a report said Wednesday, as the former World War II enemies jockey over the telling of their shared history.

Tokyo has not officially replied to Beijing's comments on the march, being held to mark the 70th anniversary of the end of the conflict, but it is unlikely that Prime Minister Shinzo Abe will go, the Yomiuri Shimbun reported.

The parade will officially celebrate "Victory Day of the Chinese People's War of Resistance Against Japanese Aggression".

Earlier this month China's foreign minister said Abe would be welcome if he is "sincere", and that Japan should face up to its wartime past and not "lose its conscience".

Asked whether Abe would be invited to the march, Wang Yi said: "We will extend invitations to the leaders of all relevant countries and international organisations." "We welcome the participation of anyone who is sincere about coming."

China's foreign ministry regularly urges Japan to "show sincerity" over history, signalling that it does not believe Tokyo is earnest enough.

Abe has said he will release a fresh statement on World War II this year, one that will "in general" stand by previous apologies for wartime misdeeds.

However, the exact wording of the statement is being carefully watched for any signs of backsliding.

The parade is just one of a number of possible flashpoints in a relationship heavily coloured by attitudes to history and the fluctuating power balance between Asia's two largest economies.

Tokyo is uneasy about what it sees as Beijing's growing assertiveness in the region, including through the regular double-digit rises in its military spending.

"Japan is asking China to improve the transparency of its military budget, so it's impossible for the prime minister to attend," a senior Japanese diplomat told the daily.

Japan also wearies of what it says is China's constant references to the past, which it says ignore the benign behaviour of the last seven decades.

"In the 70th anniversary year... we think it is important for us to show willingness to tackle common challenges the global community faces in a forward-looking manner," Chief Cabinet Secretary Yoshihide Suga said.

He declined to comment on whether Abe would attend the Chinese parade.

"We have told them our country's way of thinking regarding such an official ceremony," he said.