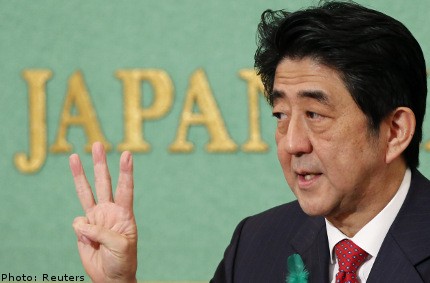 TOKYO - Prime Minister Shinzo Abe's efforts to improve strained ties with China by staying away from a Tokyo shrine to war dead could be thwarted if cabinet members and a ruling party executive pay their respects there next week.

Often fragile Sino-Japanese relations have been badly frayed for nearly a year by a row over uninhabited islands in the East China Sea claimed by both countries, disputes over Japan's wartime history, and regional rivalries.

Abe, who returned to power in December after his Liberal Democratic Party-led coalition's big election win, will probably skip a pilgrimage to Yasukuni Shrine, seen as a symbol of Japan's past militarism, on the Aug. 15 anniversary of Japan's defeat in World War Two in the hope of opening the door to a summit with Chinese President Xi Jinping.

But Tomomi Inada, minister for administrative reform, plans to visit the shrine, where Japanese leaders convicted as war criminals by an Allied tribunal are also honoured, on Aug. 15 as does LDP policy chief Sanae Takaichi, the Asahi newspaper said.

"It does not matter in what form or using what identity Japanese political leaders visit the Yasukuni Shrine, it is an intrinsic attempt to deny that period of history of invasion of the Japanese militarists, and China cannot accept it," it said.

Japanese diplomatic experts said that China in the past had been angered mainly by top leaders' visits to the shrine - specifically the prime minister, foreign minister and chief cabinet secretary. But in the current tense climate, pilgrimages by lesser political lights would also have a negative effect.

"Abe's message will evaporate," if Inada and Takaichi go to Yasukuni, said a Japanese political source with ties to China."But he is popular enough that he can halt them if he wants."

Conservatives say it is natural to pay respects at Yasukuni to those who died for their country.

Japan hopes that if Abe - who avoided the shrine during his first 2006-2007 term but has said since he regretted doing so - stays away on Aug. 15, it would help smooth the path to a leaders' summit.

China, however, officially denies that any talks on a possible summit are taking place and shown no public signs of even wanting one. The country's Foreign Ministry has accused Abe of simply "chanting empty slogans" in his push for talks with Xi.

Tension flared in April between Japan and neighbours China and South Korea after Finance Minister Taro Aso, who doubles as deputy prime minister, and two other ministers visited Yasukuni, followed by a group of at least 168 lawmakers.