Japan's health ministry has scrapped a poster campaign encouraging terminally ill people to make preparations for their final days after a fierce backlash from patients and the public.

The Ministry of Health, Welfare and Labour launched the campaign on Monday but recalled the 14,000 posters that had been sent out just 24 hours later in the wake of sharp criticism.

In the advert, a well-known stand-up comedian could be seen lying in a hospital bed looking worried, prompting critics to say that it was in poor taste.

The campaign had been devised to promote a new system - officially called Advance Care Planning but more informally known as "the life meeting" - that was introduced by Japan's health authorities last year to help those in the twilight of their lives and their families prepare for death.

Issues of palliative and end-of-life care have become particularly pressing in recent years as Japan's society rapidly ages. Those older than 65 now account for close to 30 per cent of the population and the proportion is set to increase, according to government figures.

For the ad campaign, the health ministry brought on board the Osaka-based Yoshimoto Kogyo agency, which handles dozens of Japan's top comedians.

In discussions, it was decided that Kazutoyo Koyabu would be the face of the campaign, with the 46-year-old comic also credited with coining the phrase "the life meeting".

In the poster, Koyabu is shown lying in a hospital bed attached to a breathing apparatus with someone - presumably a concerned relative - holding his hand. The comic can be seen pulling a face that could be interpreted as either a frown or a smile.

An accompanying message reads, "My life ends here? I didn't tell you all the important things that I needed to say. I wanted to relax with my wife and my child. Everyone, have 'the life meeting'."

The poster was swiftly criticised for being poorly thought-out.

"This is a poster for a death meeting rather than a life meeting," said Shinsuke Amano, president of the Federation of National Cancer Patients' Associations, in a Facebook message.

"[Advance Care Planning] is necessary but this message can easily be misunderstood and this looks almost like a threat," he said. "It shows a lack of consideration for bereaved families." 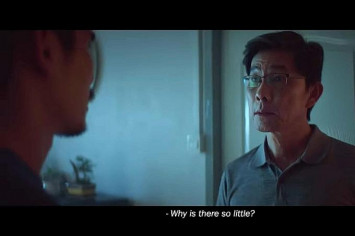 Miho Kataki, who heads an organisation representing people with ovarian cancer, wrote a protest letter to the ministry saying they had "ignored the feelings" of people struggling to overcome the disease and were now confronted with the message that they had little time left.

Makoto Watanabe, an associate professor of media and communications at Hokkaido Bunkyo University, said a "trend" has emerged in Japan of ministries and local governments turning to comedians to communicate their messages, but that the tactic does not always work.

"Using a graphic image of someone on their deathbed, even if it is a famous comedian, just does not work," he said. "It's not engaging; it's insulting, humiliating and mocking at what is already a really difficult time for patients and their families."

The academic added that "trying to make death funny is in incredibly poor taste".

"And instead of paying these people huge amounts of money for these campaigns, I think that the government should really be focusing its efforts on finding ways to fix the problems with the health system, including finding ways to secure funding as the population ages," he said.