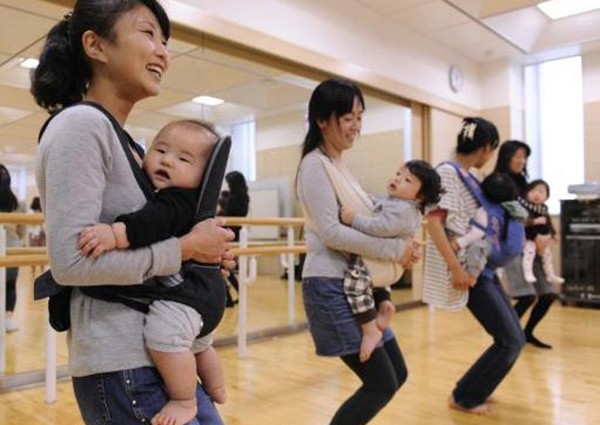 TOKYO - Japan has set its sights on stopping maternity harassment, increasing day care centres and allowing more workers to take time off after childbirth in a bid to slow its declining population and shore up the economy.

Prime Minister Shinzo Abe will also offer some cash handouts to the poorest pensioners as the government releases policies this week intended to improve domestic demand.

Tackling Japan's rapidly ageing and declining population has become an urgent task because labour shortages and a shrinking domestic market are increasingly becoming an obstacle to higher economic growth and private sector investment.

"The second stage of Abenomics is about strengthening the foundations of childcare and welfare to improve the economy,"said Abe said after a meeting with cabinet ministers.

Abe said on Thursday the government would focus more on childcare, welfare and the re-distribution of wealth, which could blunt criticism that his policies are not trickling down.

The government will submit more than 10 bills to the regular session of parliament next year in an attempt to raise the birth rate to 1.8 per woman from 1.42 currently and make it easier to care for the elderly, Cabinet Office officials said on Thursday.

The legislation will tackle maternity harassment that captured the public's attention last year when the Supreme Court handed a partial victory to a woman who sued her former employer for being demoted during pregnancy.

Since then, more pregnant women and young mothers have come forward with stories of being harassed at work, discouraged from taking legally guaranteed maternity leave or simply being pressured to quit.

The bills will also make it easier for non-regular workers to take time off during pregnancy, expand subsidies for infertility treatment and increase capacity at retirement homes.

The government is on course to decide the amount of new spending on these steps next month when it is likely to compile an extra budget. The ruling coalition's control of parliament means the bills face no serious obstacles to becoming law.

Abe's aim is to prevent the population from falling below 100 million from around 127 million currently.

Some economists say Abe's plans are not enough because an advanced economy usually requires a birth rate of 2.1 simply to keep its population steady.

Earlier on Thursday, Abe also received assurances from the Keidanren, Japan's largest business lobby, that companies will pick up the pace of wage increases next year.

This is a boon for the government because Abe has set his sights on increasing wages, including the minimum wage, as a way to shift consumer spending and domestic demand into a higher gear.