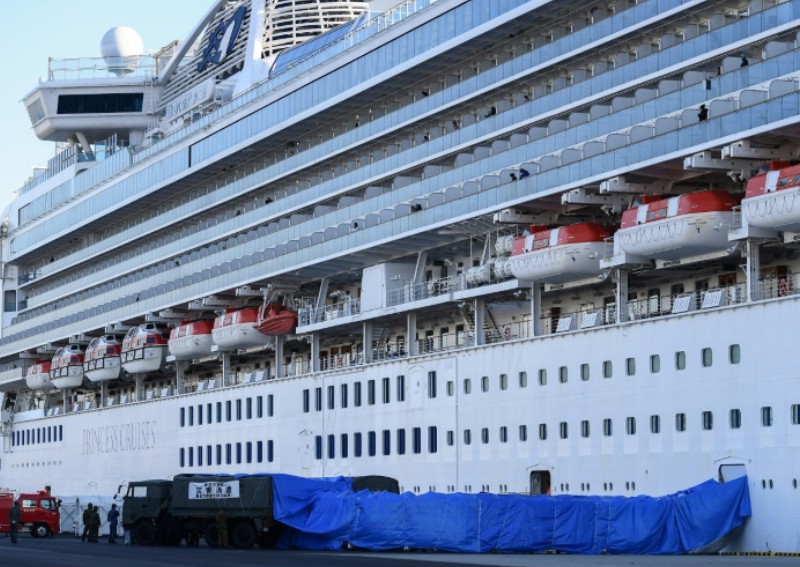 Japanese military personnel set up a covered walkway next to the quarantined Diamond Princess cruise ship in Yokohama port.
AFP

Japan on Thursday reported the first death of a person infected with novel coronavirus, as the number of cases on a quarantined cruise ship offshore soared over 200.

The woman in her 80s was tested for the virus after being hospitalised, and was confirmed positive after her death, Health Minister Katsunobu Kato told a news briefing.

However, it was not clear if the virus or other complications had caused her death, Kato warned.

"The relationship between the new coronavirus and the death of the person is still unclear," he said.

The death came as three additional new infections were confirmed in Japan, including a taxi driver in Tokyo. They bring the number of cases in the country to 32, excluding those on the ship and a quarantine officer.

The Diamond Princess cruise ship off Yokohama has become the single largest cluster of cases outside China, with 218 testing positive for the COVID-19 virus and taken to medical facilities.

Earlier Thursday, Japan announced elderly passengers would be allowed off the ship if they test negative.

They will be given the option of moving to government facilities to wait out a quarantine that is set to last until February 19.

In a statement, operator Princess Cruises said it had been told the government-appointed lodgings would offer individual rooms and bathrooms, with access to medication, but no on-site medical care.

"The food available will not accommodate dietary preferences but will accommodate certain medical conditions. The meals provided will be Japanese bento-style boxes. No Western meals will be available.

WORKING AROUND THE CLOCK

Thousands of passengers and crew on board were facing nearly a week more of isolation, with many expressing frustration and fear.

While passengers are struggling with cabin fever, crew members are working around the clock and worried that they are exposed to the greatest risk of infection.

"The situation on board is getting worse day by day," 24-year-old ship security officer Sonali Thakkar told AFP.

"This morning they told us that 44 people have been infected and everyone is really scared and wanting to get off as soon as possible," she added.

"All we want is tests to be done and to be separated from those who are positive. We don't want to stay on board."

With passengers mostly confined to their cabins, crew members have to go door-to-door to deliver food and other supplies, and some fear this has reduced the effectiveness of the quarantine.

"I haven't got the virus yet, but I don't want it to be so late that I catch the virus. I don't want to wait to find out that I'm the one that has it," Thakkar said.

The dozens of new cases diagnosed almost daily have raised questions about the pace of testing and whether the quarantine is working.

Thakkar said that while passengers were confined to quarters, the crew were eating together, working together and sleeping two to a cabin with shared washing facilities.

Japan initially tested around 300 people who had close contact with the first infected passenger, or displayed symptoms, but has gradually widened the net as new cases are detected.

Officials say they can only process 300 people a day, but hope eventually to expand this to 1,000.

Prime Minister Shinzo Abe said Thursday the government would set aside 15.3 billion yen (S$194 million) for the fight against the virus, including to boost testing, strengthen inspections at borders, and support manufacturers of face masks.

Japan has evacuated hundreds of people in four flights from the centre of the outbreak in Hubei province, with most of the returnees undergoing "self-quarantine" in government-designated hotels.

Evacuees from the first flight, which landed on January 29, were cleared to leave the quarantine on Wednesday night after passing a final round of checks.

As they left their hotel in Chiba, east of Tokyo, they thanked local residents for their solidarity.