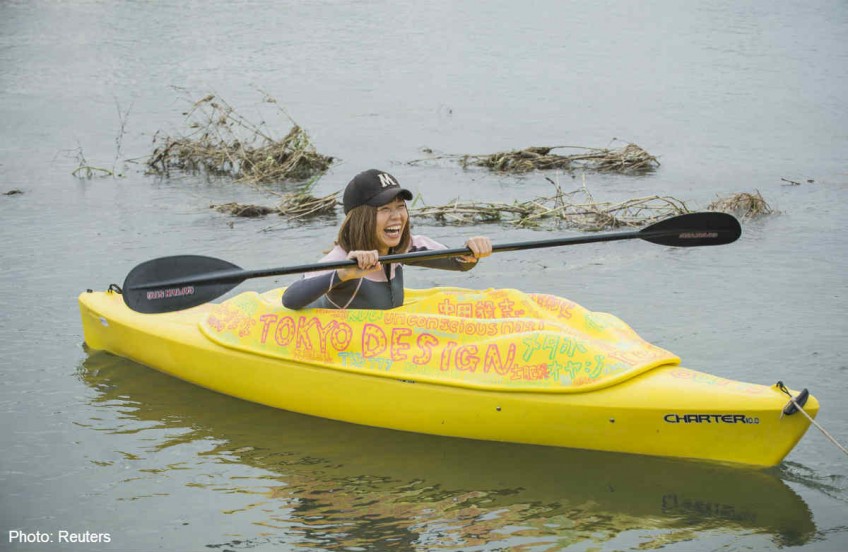 Japanese artist Megumi Igarashi, known as Rokudenashiko, paddles in her kayak modeled on her vagina in the Tama river in Tokyo.

TOKYO - A Japanese artist who made figures of Lady Gaga and a kayak modeled on her vagina said on Wednesday from jail she was "outraged" by her arrest and vowed a court fight against obscenity charges.

Megumi Igarashi, 42, says she was challenging a culture of "discrimination" against discussion of the vagina in Japanese society.

Igarashi, who worked under the alias Rokudenashiko, which means "good-for-nothing girl" in Japanese, built a yellow kayak with a top shaped like her vagina after raising about US$10,000 through crowdfunding.

Igarashi sent 3D printer data of her scanned vagina - the digital basis for her kayak project - as a thanks to a number of donors.

She was arrested for distributing indecent material on Saturday and faces up to two years in prison and a fine of up to US$25,000.

Igarashi said about 10 police officers had arrived at her house on Saturday and initially, she thought they were only interested in confiscating work she has said is meant as a pop-art exploration of the "manko", vulgar Japanese slang for vagina.

"I couldn't stop myself from laughing a little as I explained to the grim-looking officers, 'This is the Lady Gaga'manko' figure'," Igarashi told Reuters from across a plastic security divide in a central Tokyo jail.

"I did not expect to get arrested at all. Even as they were confiscating my works, I thought to myself, 'This will be a good story'. Then they handcuffed and arrested me. Now, I just feel outraged." More than 17,000 people have signed an online petition for Igarashi's immediate release on Change.org, an online platform for grassroots petitions.

Igarashi wore black trousers and a sweatshirt provided by police. She said she was allowed to shower twice a week and was eating toast, jam and juice because she did not have money to pay for extra dishes like curry.

She can be detained until the end of July before charges are filed.

Igarashi has touched off a debate on both women's rights and the freedom of artistic expression, said Kazuyuki Minami, her lead defence lawyer.

The legal definition of what counts as obscenity is vague in Japan, and the key point of debate will be deciding whether the vagina itself can be considered obscene, said Minami. "It will be a difficult battle," Minami said.

Although Japan has an extensive pornography industry, it remains regulated by a section of the criminal code that dates back to 1907. Video pornography in Japan has often used digital mosaics to obscure genitalia in sex scenes as a way to avoid obscenity charges.

A 1951 Supreme Court case broadly defined obscenity as something that stimulates desire and violates an ordinary person's sense of sexual shame and morality.

Igarashi's arrest comes at a time when Prime Minister Shinzo Abe has pushed to increase the participation of women in the work force and executive positions to bolster the economy.

Igarashi says she began making artwork to address what she saw as a double standard applied to both female and male genitalia in Japan.

The vagina "has been such a taboo in Japanese society", she wrote on her website. "It's been overly hidden although it's just a part of a woman's body." During a jail visit by friends, Igarashi asked for a copy of a manga comic book of essays she wrote on how she became a"decorative vagina" artist to give to her cell-mate.

She said she was already planning to write about her experience behind bars.