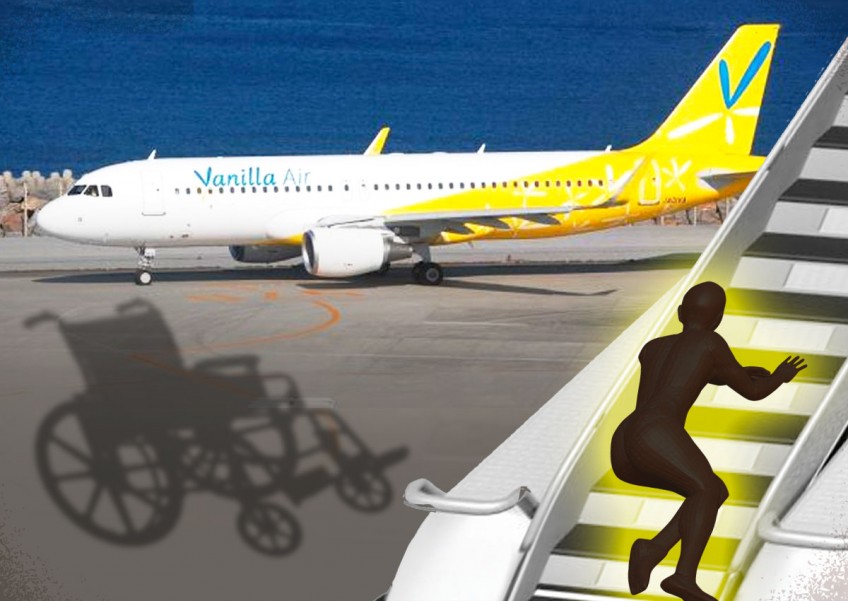 TOKYO - A Japanese budget airline apologised Wednesday for forcing a wheelchair-bound man to crawl up a set of stairs to board his flight.

Hideto Kijima, 44, was returning last month to Osaka from a vacation in Amami, a small island off southern Japan, when a Vanilla Air employee told him that company safety rules banned anyone from carrying him up the stairs.

There was no lift at the small airport to move disabled passengers from the tarmac up to the jet's door.

Kijima, who is paralysed from the waist down, said in a blog that he was forced to crawl up the stairs using only his arms.

The Asahi newspaper said the man pulled himself up some 17 steps.

Vanilla Air, the budget arm of major carrier All Nippon Airways, said it had apologised to Kijima.

"We're sorry that we caused him that hardship," a company spokesman told AFP, adding the carrier has since made it mandatory to have lifts for disabled patrons at that airport.

The airline had previously barred passengers who could not walk from boarding a flight at Amami because it was dangerous to carry someone up the stairs, the spokesman said.

Kijima, a frequent traveller outside Japan, told Nippon TV on Wednesday he was "surprised" when staff said he would not be able to fly if he could not walk up the stairs.

"I wondered if the airport employees didn't think that was wrong," he added.