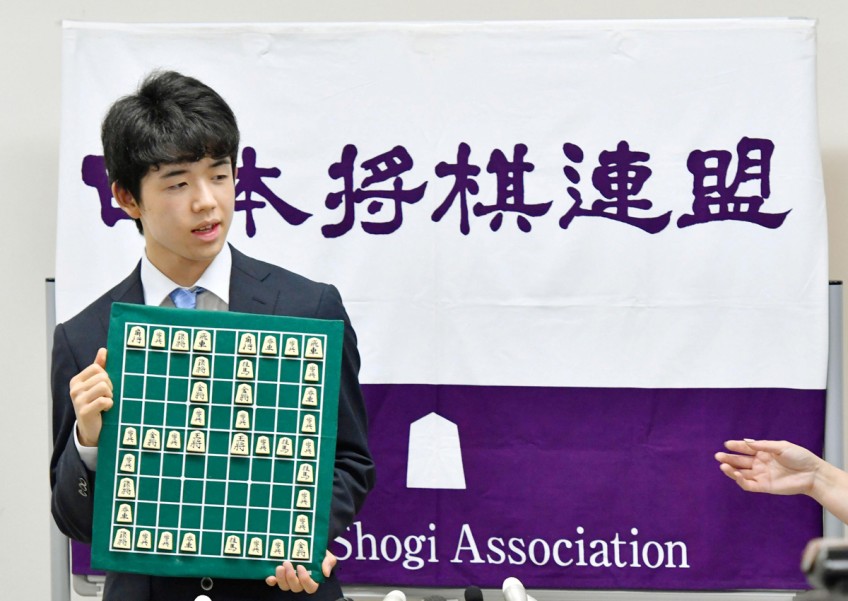 TOKYO - A 14-year-old Japanese player of the traditional chess-like board game of shogi has captured the nation's heart by winning a record straight 29 matches, breaking a record held for 30 years.

Sota Fujii, who trains himself with computer software and was the youngest player ever to turn professional, surpassed the previous record of 28 consecutive wins on Monday.

His feat, a rare bright spot in a nation grappling with more than 15 years of deflation and stagnation, drew applause from all walks of life ranging from avid shogi fans to the prime minister. His picture was all over Tuesday's front pages.

After a gruelling 11-hour match on Monday with a 19-year-old fellow professional, Fujii was calm before reporters.

The object of shogi, also known as Japanese chess, is to checkmate the opponent's king, as in the Western game. But there are no black and white squares or pieces, and most pieces can only move one square at a time.

Following the centuries-old shogi tradition, Fujii has a senior professional shogi player as an official mentor.

But his game has improved significantly since he started training with computer software about a year and a half ago, frowned on by many professional shogi players, the Asahi Shimbun daily said.

"A professional shogi player is lucky if he has as many as 1,000 matches in his lifetime. An artificial intelligence-based programme has several thousand times more matches than that virtually, and accumulates expertise," a Japan Shogi Association official said.

"Professional players understand computers' strength and their way of thinking is now shifting to how to use AI to improve their own strength."

Ke, the world's No.1 Go player, is 19, while Norway's Magnus Carlsen, the current world chess champion, became a chess grandmaster at 13.

No matches between Fujii and an AI-based programme is planned at the moment, the Japan Shogi Association said.