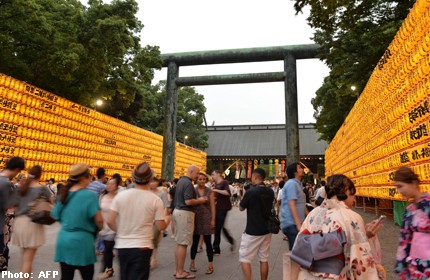 The Yasukuni Shrine (above) has been a constant source of tension in Northeast Asia.

Tokyo is adopting a position of neutrality to "dodge responsibility" for failing to prevent its cabinet members from visiting the Yasukuni Shrine, a former Chinese senior diplomat said.

Xu Dunxin, former vice-minister of foreign affairs, who also served as Chinese ambassador to Japan from 1993-98, said Japanese politics is shifting to the right and the country is seeking a more assertive defence policy, both of which are against its pacifist promises.

"The seeming neutrality presented by the ruling party and its senior officials is actually an attempt to evade responsibility, and such an attitude goes against Japan's obligations written in relevant international treaties," Xu said.

Japanese Cabinet Chief Secretary Yoshihide Suga said on Thursday that Tokyo had no comment on Cabinet members' visits to the shrine.

Early in April, Suga defined a Yasukuni visit by Deputy Prime Minister Taro Aso as "a personal decision", and said it involved domestic affairs and should not influence the country's diplomacy.

"Decades ago, Japan's politicians and leaders used to recognise its wartime deeds, but now their successors want to reverse that verdict and deny the facts," Xu said.

After retaking office in December, Shinzo Abe expressed a desire to revise his predecessors' speeches that reflected on Japan's militaristic past.

The growing momentum of right-wing politics has serious consequences, including encouraging outspoken remarks from other Cabinet members, Xu said.

Aso angered Japan's neighbours in July after he mentioned Nazi Germany as an example for revising Japan's pacifist Constitution, and although he later withdrew those remarks, he refused to apologise.

"Such comments were inspired by the right-wing inclination in the government and this is never a coincidence," Xu said.

Monday marked the 35th anniversary of the signing of the landmark China-Japan Peace and Friendship Treaty in 1978. However, there was no grand commemorative ceremony by either side due to the ongoing diplomatic deadlock between the two neighbours.

But Xu said Tokyo is "telling lies" and trying to gloss over the fact it was the Japanese who provoked the Chinese by making a unilateral purchase of China's Diaoyu Islands last year, leading to a deadlocked relationship.

The veteran diplomat said he wonders if Japan will continue to seek a peaceful development path when the ruling Japanese Cabinet has taken a series of assertive measures to boost military buildup .

A series of plans were unveiled earlier this year to lift the ban on the country's armed forces and the defence budget has been increased for the first time in 11 years.

"China and other neighbours in Asia express concerns, and so does the United States," Xu said.

He said the demographic change is a factor behind the surging nationalistic mood within Japan.

"As time goes by, the Japanese younger generations feel removed from the history of World War II, with less experience and knowledge about the war. Meanwhile, the turbulent politics and sluggish economy are pushing voters to radical nationalism," Xu warned.

The former vice-foreign minister expected conflict will continue in Japan between the pacifist voice and the right-wing mood.

"Not all voters supporting the Abe cabinet may applaud each of the radical policies proposed. The Japanese public now cares most about boosting the economy and a better employment rate," Xu said.