Japanese man, 61, kept father's decomposing corpse for a month as he was scared to be alone

A Japanese court has taken pity on a hikikomori, or social recluse, who was charged with failing to report his father's death - after he told the judge that he bathed and cared for the decomposing body for nearly a month because he was frightened to be without his only friend.

Prosecutors had been demanding a one-year prison sentence after he was found guilty, but the court decreed that his punishment would be a one-year term suspended for two years.

The case has refocused attention on the plight of the more than 1 million hikikomori across Japan, particularly because parents who have cared for their reclusive children for decades are now elderly and beginning to die.

The inevitable result, experts say, is a wave of middle-aged people who do not work, have limited social skills and have little or no experience of how to function in society - and who are being left without anyone to care for them.

The Tokyo District Court last month heard that the man, 61, who has not been named in the media, did not contest the prosecution's allegations that he failed to report his father's death. The defence denied, however, that he did so to continue claiming his late father's pension.

The man's 91-year-old father died in their small flat in Tokyo's Adachi Ward in the summer. The son told the court that he was with him when he died in the early hours of July 31 and immediately bathed his body and changed his pyjamas.

Over the following days, he repeated the same ritual and wiped away insects that began to gather. The body began to leak fluids onto the futon and the smell in the flat began to worsen. Eventually, neighbours informed the police and they entered the property.

In a series of statements to prosecutors reported by the Asahi newspaper, the man said: "I could not call an ambulance because I feared that I would really be all alone if I made a report and my dad was taken away."

The court heard that his family had moved into the flat when he was in junior school and he later found a job working in a clothing store. His mother died of cancer when he was around 20 and he later stopped working and began to stay at home. 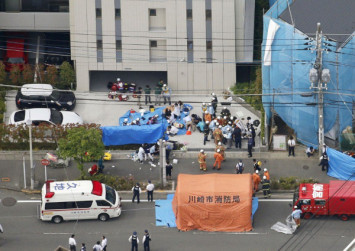 His father worked as a janitor at a nearby high school and encouraged his son to find work for a few years, but eventually stopped. Instead, the son busied himself around the flat with cleaning and cooking, with the two surviving on the father's meagre income and then his pension.

Asked by prosecutors what he planned to do with his father's corpse, the man said he had "no thoughts" as to what to do next. "I did not have anyone to speak with, so I would simply have kept things as they were."

According to government estimates, there are 1.15 million hikikomori in Japan, although expert Saito Tamaki has warned that the figure is too low and more people are withdrawing from society. Tamaki, a professor at Tsukuba University, warned that Japan could eventually have as many as 10 million such recluses.

Makoto Watanabe, an associate professor of communications at Hokkaido Bunkyo University, points out a growing number of people who became hikikomori when the condition first began to manifest itself in the 1970s - although it had yet to be named at that time - are now in their 50s and 60s.

"Usually it is the child who takes care of the elderly parents later in life, especially in Japanese society, but we are seeing this role reversal and there has to come a time when the parents pass away," he said. "There are really no provisions for this at the moment."

The Japanese government has set up a number of panels to examine measures to assist hikikomori and their families, Watanabe said, but most are focused on treatments for the condition and support for sufferers and their families - but there appears to have been no discussion of elderly hikikomori.

"We need to transition to a society that is kind and welcoming to hikikomori and others who are in some ways different," he said. "I think there has to be some way of helping those who have opted to drop out of society to get back on track, even in some little way."