Fancy a cup of Joe - except it's completely made of garlic?

A Japanese man was inspired to create "garlic coffee" following a cooking blunder some 30 years ago and it's now ready to tantalise our tastebuds.

The drink apparently looks and tastes just like your regular cup of brew, but made from locally grown garlic, said its inventor who hails from northeastern Japan.

Yokitomo Shimotai, 74, told Kyodo News: "My drink is probably the first of its kind in the world."

"It contains no caffeine so it's good for those who would like to drink coffee at night or pregnant women."

Therefore, if you're not into caffeinated drinks - a cup of garlic coffee would be perfect (or not) for you.

Shimotai, who used to be a coffee shop owner in Aomori Prefecture, launched the drink early this year in January.

The cooking mistake happened when he burnt a piece of steak with some garlic while cooking and serving customers at the same time, Kyodo News reported.

He proceeded to mash the burnt garlic with a spoon and mixed it with hot water. When he downed the mixture, he was surprised at its bitter "coffee-like taste", the report continued.

After retirement, Shimotai started researching the drink - determined to find a recipe to success.

It took him about five years of trial and error, before he finally settled on a brew he was satisfied with.

His method was to use an electric furnace to roast the garlic, cool it and mash up the garlic for dripping, said Kyodo News.

He later acquired a patent on this method in 2015 and started a workshop in Iwate Prefecture.

Read Also
Three cups of coffee a day keep the doctor away: Studies 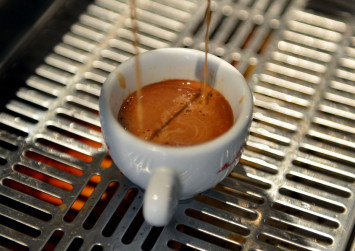 Kyodo News reported that a packet containing a cup of garlic drip coffee will set you back at least 324 yen (S$3.90) and is currently on sale at only two souvenir shops in Aomori Prefecture or via phone orders.

Now, the question on everyone's mind is - will the drink cause bad breath?

Apparently not. Shimotai said this won't be the case because the drink merely has an aroma of roasted garlic but it is thoroughly grilled.

Looks like it can't be used to scare vampires away this Halloween.