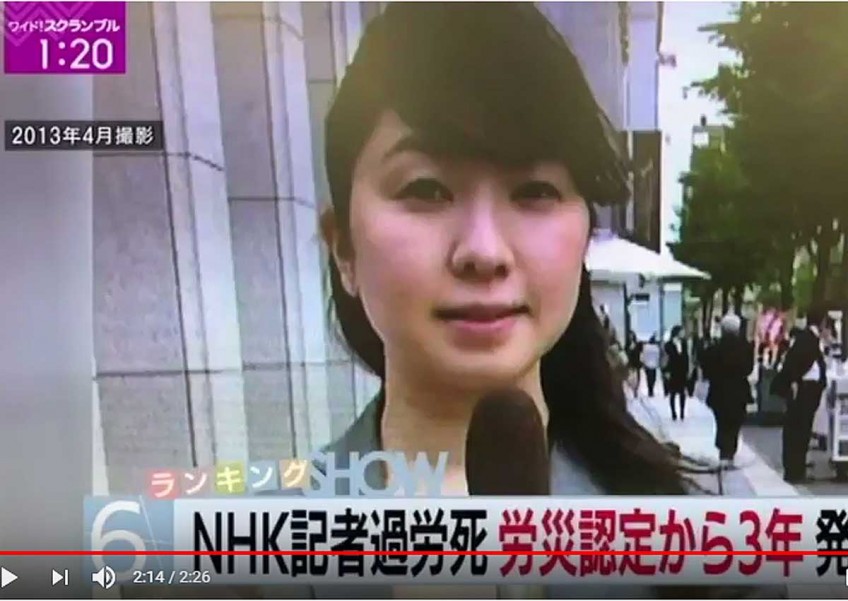 TOKYO - Japan's public broadcaster apologised Friday to the parents of a young reporter who died of heart failure after logging 159 hours of overtime in a month.

NHK reporter Miwa Sado, 31, who had been covering political news in Tokyo, was found dead in her bed in July 2013, reportedly clutching her mobile phone.

"The chairman met the parents at their home in the morning and apologised," an NHK spokesman told AFP.

A government inquest a year after her death ruled that it was linked to excessive overtime. She had taken two days off in the month before she died.

NHK eventually made the case public four years later, bowing to pressure from Sado's parents to take action to prevent a recurrence.

The case has again highlighted the Japanese problem of "karoshi" - meaning death from overwork - and is an embarrassing revelation for NHK, which has campaigned against the nation's long-hours culture.

Sado covered Tokyo assembly elections for the broadcaster in June 2013 and an upper-house vote for the national parliament the following month.

She died three days after the upper-house election.

"My heart breaks at the thought that she may have wanted to call me" in her last moments, her mother told the Asahi daily.

"With Miwa gone, I feel like half of my body has been torn off. I won't be able to laugh for real for the rest of my life."

The revelation shocked the nation as NHK has actively reported tragic deaths at other companies, including the 2015 suicide of a young woman at major advertising agency Dentsu who logged more than 100 hours of overtime in one month.

NHK's chief has pledged to improve work conditions at the broadcaster.

"We are sorry that we lost an excellent reporter and take seriously the fact that her death was recognised as work-related," President Ryoichi Ueda said Thursday.

"We will continue to work for reform in co-operation with her parents," he told reporters.

Every year in Japan, long working hours are blamed for dozens of deaths due to strokes, heart attacks and suicides.

In July, the parents of an unnamed 23-year-old worker on Tokyo's Olympic stadium who killed himself applied for compensation and asked the government to recognise his suicide as a case of death from overwork.

The construction firm employee, who began working on the project in December, clocked 200 hours of overtime in the month before his body was found in April with a note that said he had "reached the physical and mental limit".

According to a government report on death from overwork released on Friday, there were 191 "karoshi" cases in the year ending March 2017.

The report also showed that 7.7 per cent of employees in Japan regularly log more than 20 hours of overtime a week.

Labour minister Katsunobu Kato told reporters on Friday that the government will "do its best" to reduce the number of people who die from overwork to zero, according to NHK.

In an attempt to tackle the problem, the government in May released its first nationwide employer blacklist, naming-and-shaming more than 300 companies including advertising giant Dentsu and an arm of Panasonic for breaching labour laws.

In February, Japan launched "Premium Friday", calling on employees to knock off early on the last Friday of the month.

But critics slammed the plan as it was not mandatory and several companies simply opted out.