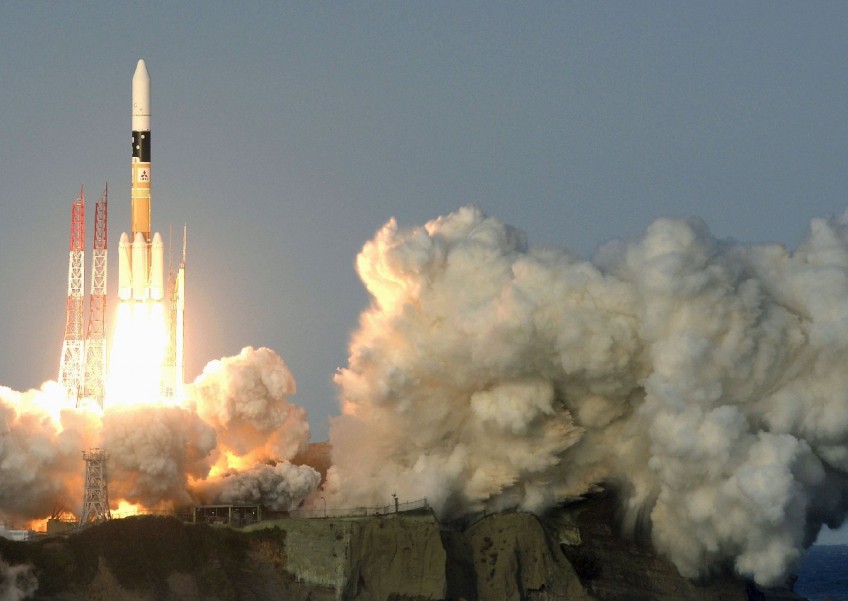 H-IIA rocket, Telesat's broadcast and telecommunication satellite, lifts off from the launching pad at Tanegashima Space Center on the Japanese southwestern island of Tanegashima
Reuters

The rocket was moved to the launch pad Monday night, beginning final preparations for the 3:23 p.m. liftoff from Tanegashima, Kagoshima Prefecture. A communications satellite for Canadian company Telesat will be carried into geostationary orbit at 36,000km. The previous 28 H-IIA launches have a 96.4 per cent success rate, with only one failure. Mitsubishi Heavy has handled launch service operations since the 13th flight, with the JAXA space agency continuing to oversee safety management and other duties.

The newest rocket can carry payload closer to geostationary orbit than its predecessors. Satellites, once detached from their carriers, use their own engines to climb into final position. Those launched from Tanegashima on previous H-IIA rockets needed to expend a lot of fuel to reach their position, shortening their operational lives. Rockets from Europe's Arianespace and other companies have been preferred as a result, given their launches' proximity to the equator.

But the improved H-IIA can fly for four and a half hours, far longer than its previous versions. Telesat's satellite will enter geostationary orbit before detaching from its carrier, saving fuel and giving it a longer usable life.

Mitsubishi Heavy's "rocket-launch business will gain a good deal of recognition if this launch goes well," said Koki Nimura, a senior chief engineer at the company.