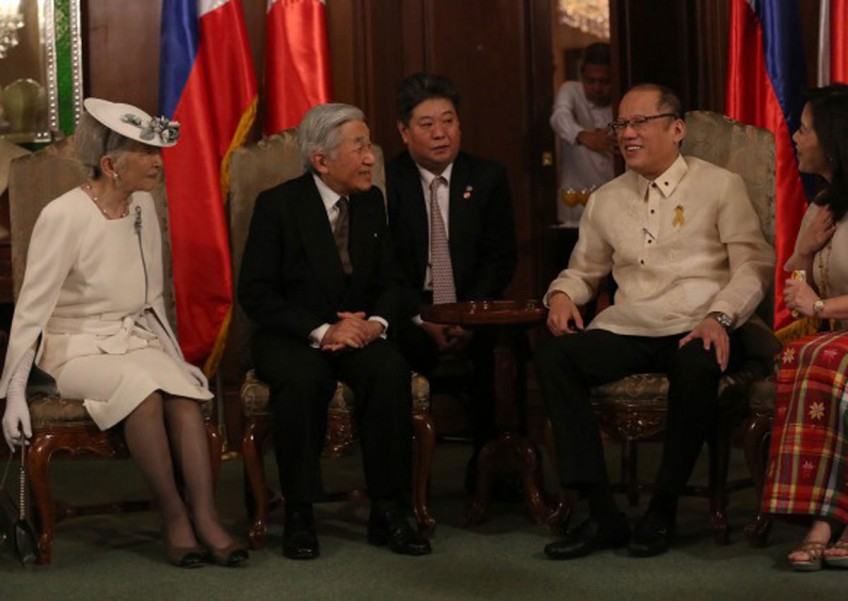 Although he may not find himself tied up in Metro Manila's heavy traffic, which is partly due to the popularity of Japanese-made cars, Emperor Akihito said "congestion" was one of the major issues in the transportation sector.

Emperor Akihito and Empress Michiko are on a five-day visit that marks the 60th anniversary of diplomatic relations between the Philippines and Japan.

Malacañang Wednesday said President Aquino and the emperor had talked about the "heavier traffic volume in Metro Manila because of the increased automobile sales, mostly of Japanese make."

Vehicle sales by the Philippine automotive industry surged 23 per cent last year to 288,609 units. Of the top five vehicle makers in the country, four were Japanese-Toyota (43.3-per cent market share), Mitsubishi (18.7 per cent), Isuzu (7.8 per cent) and Honda (6.7 per cent), according to the Chamber of Automotive Manufacturers of the Philippines Inc.

The surge in motor vehicle sales, population growth and limited road network has resulted in traffic congestion, which has been described by traffic and navigation application Waze as the worst in the world.

A study by the Japan International Cooperation Agency placed the economic losses due to the congestion in the metropolis at P2.4 billion a day, which could rise to P6 billion a day by 2030 if the government failed to intervene.

In a news briefing on Wednesday afternoon, Hatsuhisa Takashima, press secretary to Emperor Akihito, said "the President mentioned that the biggest issue of Philippine economy is traffic infrastructure and how to modernize it."

Takashima said Mr. Aquino expressed gratitude to the Japanese government for its assistance in helping the Philippines improve its train system and airport.

Recently, the two countries agreed to advance efforts to improve the transport infrastructure in Metro Manila through a road map aimed at establishing a transportation network in the capital and surrounding areas.

Takashima said the emperor, in return, told the President that one of the major issues in the transportation sector was "congestion," which Mr. Aquino said the government had been addressing.

The Philippines' problems in agriculture were also discussed in the meeting.

"The President mentioned that the Philippines was a major agricultural country in the past," Takashima said.

But the Philippines, however, turned into a net importer of rice.

Curious, the emperor asked why. The President, in response, blamed the lack of maintenance in the irrigation system and failure to control the price of rice, Takashima said.

The President also noted the aging workforce in the agriculture sector and the lack of interest of the youth in agriculture. The average age of Filipino farmers is 57.

Last year, the Japanese government pledged $2 billion in loans to the Philippines to fund the first phase of the North-South Commuter Railway project, the 36.7-kilometer railway from Tutuban in Manila to Malolos in Bulacan province. The project is aimed at extending the Tutuban-Legazpi City line to Matnog, Sorsogon province.

Asked, however, if World War II was tackled during the meeting, Takashima said there was no mention of it.

"But as you know the emperor has expressed his great profound remorse over the loss of lives of many Filipinos during the war. The emperor has mentioned that the Japanese people must remember the agony suffered and experienced by the Filipinos," he said.

Takashima described the meeting between President and the Japanese figurehead as "tight" but "cordial and friendly."

The Japanese emperor was expected to deliver a speech during the state banquet to be hosted by Mr. Aquino at Rizal Hall in Malacañang last night.

On Wednesday morning, the emperor and the empress were welcomed by Mr. Aquino and his sister, Pinky Abellada, in Malacañang where they were given full state honors.

It was followed by the signing of the guest book in the Reception Hall and a private meeting in the Music Room where the President and Emperor Akihito talked about the traffic situation, among other issues.

They were accompanied by Empress Michiko, Abellada and Foreign Secretary Albert del Rosario.

"They talked about the emperor's visit to the Philippines, including Baguio and Tagaytay; heavier traffic volume in NCR (National Capital Region) due to increased automobile sales, mostly of Japanese make; significant presence of Japanese retailer Uniqlo and the Heat Tech technology," Communications Secretary Herminio Coloma Jr. said in a note to reporters.

In a separate statement, Del Rosario described their meeting with the royals as "characterized by warmth and congeniality."

Del Rosario said it was with "fondness" that their majesties recalled their previous visit to the country in November 1962.

They also talked about the "significant increase in Filipino visitors to Japan," he added.

"As their majesties will be visiting the IRRI (International Rice Research Institute), the President and the emperor spoke extensively about its importance to global agricultural developments," Del Rosario said.

Emperor Akihito and Empress Michiko arrived at the Palace grounds shortly after 10 a.m. and were met by the President and sister Pinky, standing in for first lady since the Chief Executive is a bachelor.

It was the small gestures of the royals that left a lasting impression on their second visit to the country: the bow before the flags and the troops; the warm smiles and hand-holding; the appreciation for indigenous Philippine music; and an interest in the country's history.

The state honors began with the two leaders taking their place at the dais and their respective national anthems were played, followed by the inspection of troops.

The President and the emperor gingerly walked on the red carpet (Akihito is 82 years old) as the Japanese royal bowed before the Philippine and Japanese flags and looked at the soldiers as he walked past them.

The emperor again bowed before the troops after he and Mr. Aquino returned to the dais.

Empress Michiko, glowing in a pristine white business suit, clearly enjoyed the indigenous music, stopping to clap her hands while listening to the musical group Pangkat Kawayan, which used bamboo instruments, before she entered the Palace.

The emperor stood beside her and also smiled at the group when the empress was seen touching him on the arm, whispering something to him.

After that, the emperor was seen clapping too, as they continued to listen to the music.

As the royals prepared to walk inside the Palace, they held hands, as if by sheer reflex.

At the Reception Hall, the President and his military aide smiled after Michiko politely refused to sign the guest book, explaining that the emperor had already done so.

As they walked through the huge reception area of Rizal Hall where the portraits of all past Philippine Presidents were displayed, Mr. Aquino and Abellada talked about history with the imperial couple, according to a presidential aide.

The emperor stopped before the portraits of the late Presidents Corazon Aquino and Diosdado Macapagal.

The late Cory Aquino attended Akihito's enthronement in 1990, while Macapagal was the President when Akihito and Michiko first visited the Philippines.