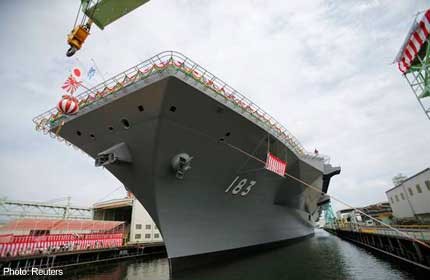 Japan's new carrier-like warship "Izumo", which has a flight deck that is nearly 250 meters (820 feet) long, is unveiled in Yokohama, south of Tokyo.

Tokyo's move coincided with Manila's latest efforts to upgrade its military, as the Philippine navy received a second former US coast guard ship. Manila received the first ship in 2011.

Analysts see the upgraded warships in Japan and the Philippines as efforts to gain an upper hand in maritime disputes with China, as well as a catalyst igniting an arms race that would escalate regional tensions.

China's Ministry of National Defence expressed concern on Tuesday about Japan's "continuous military buildup" and urged it to adhere to peaceful self-defence.

"Japan should reflect on its history, adhere to self-defence and the promise of following the path of peaceful development," the ministry's bureau for media affairs told China Daily. The ministry also called for Japan's neighbours and the international community to be "highly alert".

The Japanese military held a ceremony in the port city of Yokohama on Tuesday to show off its new 248-meter helicopter carrier 22DDH, which is expected to be a centrepiece of its naval power under the Self-Defence Forces, which are banned from aggressive action.

The Japanese-built carrier has a displacement of around 20,000 tons.

It can accommodate 14 helicopters and will play a major role in disaster and rescue missions, as well as defend sea passages and Japanese territory, according to Japan's defence ministry.

But it is much larger than many countries' aircraft carriers in terms of displacement and deck length, and it can be easily and swiftly refitted to support F35-B fighters, which have strong combat capabilities, said Zhang Junshe, a senior researcher at the People's Liberation Army Naval Military Studies Research Institute.

"It is an aircraft carrier, and Japan just called it 'a helicopter destroyer' to downplay its aggressive nature," Zhang said. Japan, defeated in World War II, is creating regional tensions by breaking the postwar order, he added.

The vessel was named Izumo, the same name as the flagship of the Japanese fleet that invaded China in the 1930s.

Although the vessel is not 100 per cent an aircraft carrier at the moment, it can be a platform for Japanese forces to train under circumstances similar to that of an aircraft carrier, said Jin Canrong, an international affairs professor at Renmin University of China.

Besides, Tokyo likely intentionally chose the date of the vessel's debut - the 68th anniversary of the US dropping an atomic bomb on Hiroshima - to woo public support for the government's military ambitions by taking advantage of sentiments about the attack, Jin said.

Japanese Prime Minister Shinzo Abe has been considering developing a regular army, which would require changing the Constitution imposed on Japan by the United States and its allies after World War II. But a possible overhaul of the Constitution has stirred strong reactions among Japan's neighbours, which have long maintained that Tokyo has never come to terms with its militaristic past.

"Washington, which currently is facing defence budget cuts, needs Tokyo's assistance to guarantee the US focus on Asia. ... This also encourages Abe to beef up Japan's military," Jin added.

China has always maintained that cooperation among countries should be conducive to regional peace and stability, according to the Ministry of National Defence's response to US-Philippine military cooperation.

Manila said last week that Washington had stepped up its military assistance package in the next fiscal year to about $50 million from $30 million, the highest level since US troops returned to the Philippines in 2000.

June 29 Japanese defence ministry declared a $128 million contract with the US, purchasing four F-35 joint strike fighters. Japan plans to buy a total of 42 such fighters.

Japanese Cabinet passed the fiscal year 2013 budget. The national defence budget increased by $406.4 million compared with last year, which is also the first growth in 11 years.

The Philippines navy bought its first Hamilton-class cutter from the United States in May and renamed it as BRP Gregorio del Pilar.

The Philippines announced a purchase of 12 FA-50 fighters from the Republic of Korea.

The Philippines announced a $1.8 billion budget for military equipment procurement.

The Philippines said the US had increased its annual military aid from $30 million to $50 million.

The Philippines said it would buy the 26-year-old La Tapageuse from French Navy. The vessel is to be handed over to Philippines in 2015.

[[nid:33208]]
SUBSCRIBE TO OUR NEWSLETTER
Your daily good stuff - AsiaOne stories delivered straight to your inbox