As Japan's Princess Aiko turns 20, what her 'boring' coming-of-age reveals about an imperial family in crisis

Princess Aiko, daughter of Emperor Naruhito and Empress Masako, poses for a photograph with her pet dog Yuri at the Akasaka Estate residence in Tokyo, in November.

Japan ’s Princess Aiko celebrated her coming-of-age on Wednesday with a bland statement that observers say was deliberately calculated to avoid media hype following the departure of her cousin, the former princess Mako, from an imperial family that faces a looming succession crisis.

The only daughter of Emperor Naruhito and Empress Masako marked her 20th birthday – when Japanese citizens legally become adults – with a statement issued through the Imperial Household Agency alongside a profile of the princess that sought to emphasise she was busy taking care of her pet dog and two cats.

Aiko, who is currently barred by law from ever taking the Chrysanthemum Throne herself, thanked her parents for their “loving and careful upbringing”, alongside “all the people who have been involved in my journey up to this day”, and said she wanted to “refine” herself so she could “grow into an adult who can be of service to others”.

Observers agreed the statement had been kept as vanilla as possible to deny Japan’s tabloid media anything to get its teeth into after a year of salacious reporting on the imperial household which encouraged social media comments that at times bordered on vicious.

The prime target of reporting has been Mako, who gave up her royal titles when she married commoner Kei Komuro in October . Their years-long on-off union was breathlessly reported on by the tabloids, with Mako and her new husband moving to New York soon after their marriage to escape the media spotlight.

“It has been a really difficult year for the imperial family,” said Hiromi Murakami, a political-science professor at Temple University’s Tokyo campus. “The princess’ statement is very general in its tone and I think it’s unlikely that it reflects her true feelings on the issues facing the monarchy.” 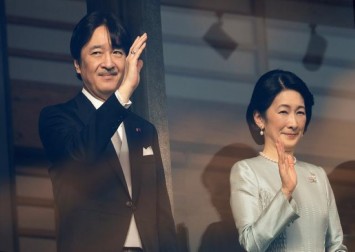 “After all the problems surrounding [former] princess Mako, the Imperial Household Agency just wants the family to keep a low profile and avoid any sort of controversy,” she said.

Aiko was never likely to rock the boat by commenting on the monarchy’s future as, constitutionally, that is for the nation’s politicians to decide. But her statement did coincide with an announcement that a government panel set up in July would compile a final report by year-end of its recommendations on how to ensure a stable imperial succession.

At the heart of the panel’s discussions has been the issue of who will assume the Chrysanthemum Throne after Emperor Naruhito. By law, only a man may sit on the throne, but the present emperor only has a daughter: Aiko.

A more immediate crisis was averted when the emperor’s younger brother, Crown Prince Akishino, sired a son: Prince Hisahito. But there are no other direct male heirs after the 15-year-old prince, which will mean the extinction of the family line if he has no sons of his own.

Repeated opinion polls among ordinary Japanese have consistently found that more than 80 per cent of the public would have no objections to a female monarch.

“There have been suggestions that this panel might suggest we permit a woman on the throne, but it can only issue recommendations and the decision will, as always, come down to the politicians,” Murakami said. “And in the Liberal Democratic Party we have a very conservative party in power and there is virtually no interest in changing the law to let a woman become empress.”

“Effectively, it is this very small group of older, conservative men who have the power and will not permit change, even though that is exactly what most Japanese want,” she said. “And the best reason that they seem able to come up with to justify their position is that it is ‘tradition’.”

Yoichi Shimada, a conservative academic who lectures at Fukui Prefectural University, noted that Prime Minister Fumio Kishida had already made clear his opposition to Japan having an empress – and said the monarchy had dodged what he described as a “Meghan Markle moment”.

“The nightmare scenario within the imperial family and for Japanese people in general was that Kei Komuro was going to provoke a Meghan Markle moment in the monarchy here,” he said.

The Canadian actress, who married Britain ’s Prince Harry in 2018 but swiftly fell out with the rest of the monarchy, “produced uproar among the British public, especially when she accused the royal family of being racists, and there were deep concerns that Komuro would cause similar disruptions here,” Shimada said.

“We appear to have avoided the worst-case scenario, but it is clear that the imperial family is treading very carefully and is hesitant to do or say anything that might prove to be controversial and make them the target once again of a media that many people consider to be quite hostile nowadays,” he said.

“But I also do not think it is in Princess Aiko’s nature to be bold in her public statements or to do anything, like her cousin, that might cause a problem, so that is why her statement might seem ‘boring’.”

While Shimada said he was not a fan of Kishida’s political philosophies and accused him of being insufficiently conservative to lead the LDP, he also does not expect the prime minister to throw his support behind a move to install an empress.

“The party is quite firm on this issue and I do not expect Kishida to waste time and energy on the idea of an empress,” he said. “I anticipate that the panel will suggest that some of the branches of the imperial family that lost their royal status immediately after the war be reinstated, which would immediately provide a far larger pool of potential male heirs to the throne and solve the problem once and for all.”