Japan's worst summer ever: How grey skies and economic concerns have rained on holidaymakers' parade

Issei Izawa, a 20-year-old student from Yokohama, had his heart set on a summer full of trips to the beach with his friends. But Japan's unseasonably dreary weather persuaded him to abandon those plans and spend the months trying to pay off student loans by taking more shifts at the restaurant where he works.

"It's not how I expected to be spending this summer but there are not too many other options and my friends are all doing the same," he says. "Maybe if we're lucky the weather might get better next month.

"I made plans with my friends to go to the beach most weekends in July and August and I've been looking forward to it because we had such a good time last year. But it has just been so grey there's no point in even going."

While Japan's rainy season traditionally ends in mid-June, Typhoon Danas brought torrential rain to northern Kyushu over the weekend, including 90mm of rain in one hour in Kurum on Sunday.

Tokyo recorded fewer than three hours of sunlight each day between the middle of June and July 16 - the worst stretch since the summer of 1961, according to the Meteorological Agency of Japan.

Equally, the average temperature in Tokyo was last week a tepid 22.1 degrees Celsius and just 21.9 degrees in Yokohama. Last July, Tokyo temperatures were above 30 degrees every day of the month. The temperature on July 23, 2018 hit a record 41.1 degrees in Kumagaya.

The weather has kept people home, with several of Japan's beaches, parks and swimming pools experiencing a sharp drop in visitor numbers.

The Toshimaen amusement park, in Tokyo's Nerima Ward opened its pool on June 29 but had welcomed only 2,547 visitors by July 15, down 95 per cent on the same period last year.

Similarly, Yuigahama Beach at Kamakura, southwest of Tokyo, announced the start of its beach season on July 1 but a tourism official told the Asahi newspaper visitor numbers to date were "less than half of last year".

"It has been a really long rainy season and it does not look like it is going to end soon either," said Sarasa Nika, acting general manager at the Yokohama Country and Athletic Club.

"Usually the pool is really busy as soon as the schools close for the summer, but it has been too cold this year. We have also had to cancel a number of events because of the weather, such as the tennis tournament and cricket matches.

"Usually we have something happening every day through the whole of the summer and we can hardly keep up, but it's very quiet this year."

Yae Saito, a coordinator for a youth education foundation in Kawasaki, said her local international festival was washed out and her plans to go camping with French exchange students were cancelled.

"I can't remember a summer worse than this," she says. "And I don't ever remember feeling cold in July. We had no choice but to cancel the camping trip because we were told there were thunderstorms in the valleys in Gifu Prefecture and we were worried that there might be flooding or landslides. It's just too dangerous to take children to a place like that."

The weather has not been the only factor to put a dampener on the Japanese summer. According to a Meiji Yasuda Insurance report, there has also been a 2.5 per cent reduction in summer bonus payments, prompting nearly 41 per cent of people to say they want to spend less on their holidays this year, an increase of 4 per cent from last year.

Others said they opted to take time off in late April and early May, when the government declared a number of one-off national holidays combined with the "Golden Week" period to mark the abdication of Emperor Akihito and the ascension of his son, Naruhito, to the Chrysanthemum Throne.

Another factor curtailing holiday spending is the government's decision to proceed with the long-planned increase in consumption tax, which is due to rise from 8 per cent to 10 per cent on October 1.

Read Also
Why Bali is not a sustainable holiday destination 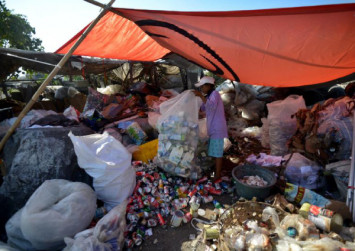 A report by Meiji Yasuda indicates the average Japanese household is planning to spend just over 68,000 yen (US$631) on summer holidays - that's 16,000 yen less than last year and the lowest since the company first started conducting the annual survey in 2006.

Businesses are also bracing themselves for a potential hit from the worsening trade dispute between Japan and South Korea. The number of Koreans visiting Japan fell 3.8 per cent in the first six months of the calendar year, the first decline in five years, and that figure is expected to rise given growing calls in South Korea to boycott Japanese products and services.