Jet Li has given his legion of fans an early present ahead of the Lunar New Year after appearing to be in much better health at an awards ceremony alongside Jack Ma in Sanya.

The martial arts superstar, who suffers from hyperthyroidism, caused concern last year after a photo of him looking frail went viral.

But on Monday night, Li was pictured chatting and smiling with Ma - chairman of the Alibaba Group, which owns the South China Morning Post - at the 2018 Rural Teacher Awards, an event launched by the Jack Ma Foundation, in Sanya, Hainan province.

The 55-year-old Li was sporting his old black hair, with some trendy black-rimmed glasses and a cool dark blue denim jacket, as he cut a low-key presence. 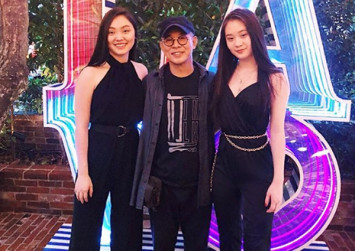 His appearance was in stark contrast to a May 2018 picture that showed him visiting a temple in Chengdu looking weak and dishevelled, and almost bald with grey, thinning hair.

Hyperthyroidism is a rare condition that accelerates the body's metabolism, causing unintentional weight loss and a rapid or irregular heartbeat.

Such were the fears for his health, the Lethal Weapon 4 and Kiss of the Dragon star took to Facebook to reassure his fans he was "feeling great".

His manager, Steven Chasman, also said "there's nothing wrong with him, there's no life-threatening illness, he's in great shape".

"If you took a picture of me at the wrong angle and wrong time of the day, I could look frail as well," Chasman added. 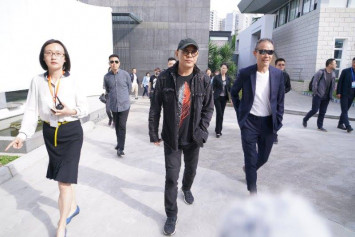 Li had also sat alongside Ma at last year's awards, and the difference is plain to see, with Li looking in much better health this time around.

Romeo Must Die star Li was in the front row again with former teacher Ma to watch all of the evening's festivities on Monday.

And Li was all smiles when he took to the stage during the show to present prizes to some of the award-winning teachers.

Li, who will feature in Disney's live-action remake of Mulan next year, is good friends with Ma - the two starred together in 2017 short film Gong Shou Dao.

Ma, the billionaire founder of e-commerce giant Alibaba, plays the role of an unbeatable martial artist who gets the better of Li and other martial arts legends such as Donnie Yen and Wu Jing.

Ma, who announced last year he would be stepping down as chairman of Alibaba in September 2019, has awarded prizes to rural teachers in Sanya every year since 2015.

The 54-year-old also gave a speech on stage at the awards ceremony and hosted a "Back to the Classroom" event on Sunday as part of the celebrations.