Jokowi declared winner with 53 per cent of the vote 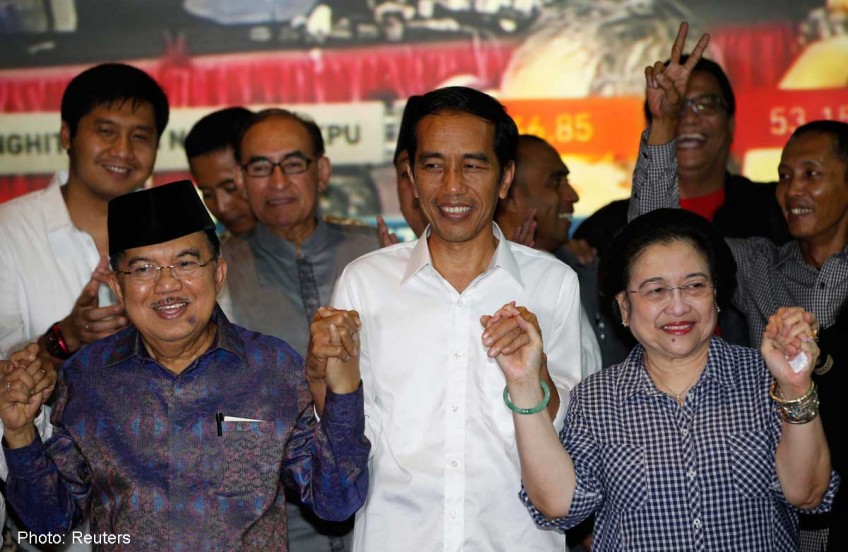 INDONESIA'S Election Commission (KPU) has declared Mr Joko Widodo to be the country's next president, with 53.15 per cent of the vote to former general Pra- bowo Subianto's 46.85 per cent.

Mr Joko garnered 70.6 million votes, a clear 8.3 million more than his rival's 62.3 million, according to results of a marathon two-week tally that confirm what eight reputable pollsters had found based on quick counts hours after polls closed on July 9.

Amid concerns over tensions spilling over from a divisive month-long campaign and a fortnight during which Mr Prabowo and his team also maintained they had won, there were no reports of unrest on a day that national newspaper Kompas said would prove to be a "test of democratic maturity".

If all goes well, Mr Joko, popularly known as Jokowi, will take over as the second directly elected leader of South-east Asia's largest economy from President Susilo Bambang Yudhoyono on Oct 20.

Singapore Prime Minister Lee Hsien Loong congratulated Mr Joko in posts on Facebook and Twitter, saying: "Congratulations to Jokowi on his election as Indonesia's next president. Looking forward to working with him to strengthen Indonesia-Singapore friendship."

But yesterday's announcement did not quite see closure to the country's most fiercely contested presidential election.

Hours before the KPU concluded the national vote tally, a defiant Mr Prabowo called a press conference where he attacked the commission and said he was withdrawing from the process, calling it "legally defective". He cited "massive, structured and systematic" cheating and asked his witnesses to walk out of the count.

Mr Prabowo's campaign team members hinted that they would not challenge the ruling before the Constitutional Court, although they have until Friday evening to file a case should they wish to do so.

But the head of the People's Consultative Assembly, Mr Sidarto Danusubroto, told reporters at the KPU that the walkout was a "humiliating" moment for Indonesia.

Mr Joko and his running mate Jusuf Kalla were at the KPU last night to hear the result, and Mr Joko was expected to make a speech to thank supporters as well as his rival later last night.

The announcement at the KPU's heavily guarded premises in central Jakarta yesterday took place amid fears of protests from aggrieved supporters, with some 3,000 policemen and soldiers on standby and access roads around the commission cordoned off all day.

But at the Hotel Indonesia roundabout not far off, over 100 members of the confederation of Indonesian workers (KSPI) demonstrated to reject the expected KPU result in the afternoon, carrying large banners that said "Illegitimate president".

Coordinating Security Minister Djoko Suyanto held a press conference, where he cited Mr Prabowo's earlier appeal to his supporters to stay calm and abide by the law.

Mr Djoko said the security forces will be on standby over the coming days to safeguard the democratic process and ensure peace, stability and order are guaranteed, and warned people that the military and police would act firmly against all actions that violate the law.