President Joko "Jokowi" Widodo has instructed law enforcement officers to impose the sternest sanctions on drug dealers operating in Indonesia, including gunning them down if necessary.

"I have told you, just be firm, especially with foreign drug dealers who enter the country and resist [upon arrest]. Gun them down. Give no mercy," he said in a speech on the United Development Party (PPP) national working meeting (Mukernas) in Jakarta on Friday.

The police arrested four Taiwanese men who allegedly attempted to distribute the drugs in Greater Jakarta and shot dead one for resisting arrest.

"We are indeed in an emergency situation in dealing with drug trafficking," Jokowi added. 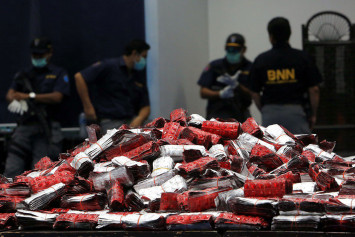 National Police chief Gen. Tito Karnavian said a lot of drug dealers thought that Indonesia was a potential market because they considered its drug laws weaker than those of Singapore, Malaysia and the Philippines.

"On this occasion, we want to emphasise that the police would act firmly and toughly, especially against the foreign [drug dealers]. I even told [officers] to act by 'custom,' which means if they resist [arrest], shoot. In this case, one Taiwanese was shot dead," Tito said earlier.

Tito alleged that the suspects had used a cruise ship, called the Wanderlust, to smuggle one ton of crystal meth from Taiwan to Indonesia. After dropping the drugs off, the Wanderlust travelled to the Java Sea, Karimata Strait and Batam.