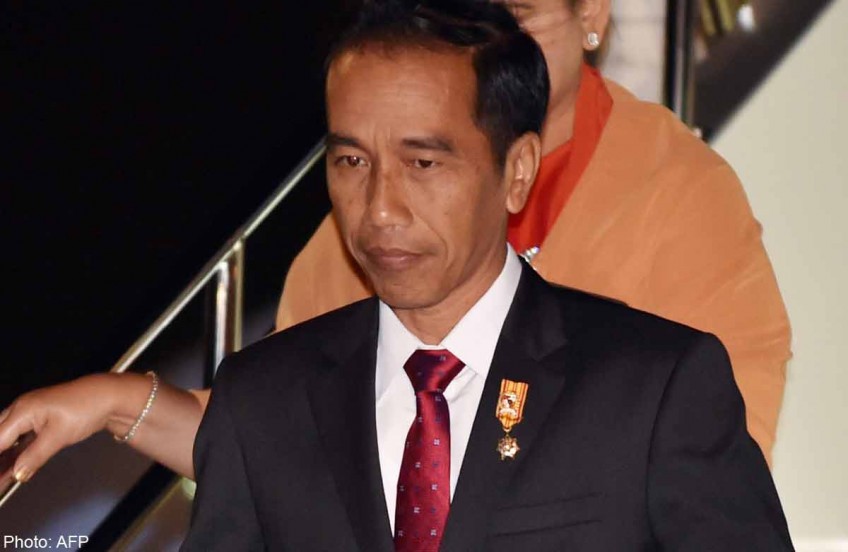 President Joko Widodo's Indonesia is expected to be one of the main beneficiaries of the bank.

President Joko "Jokowi" Widodo began a four-day official visit to Japan on Sunday evening, a trip that Japanese officials hope will strengthen the strategic partnership between the two major democracies and oceanic states in Asia.

Jokowi is scheduled Monday to hold summit talks with Prime Minister Shinzo Abe in the evening after having an audience with Emperor Akihito and Empress Michiko at the Imperial Palace in Tokyo, according to the Japanese Foreign Ministry.

Following the summit, the two governments will sign an accord on defence co-operation that will involve Japanese capacity-building assistance for Indonesian forces, as well as bilateral co-operation in peacekeeping missions, defence equipment development and exchange of military information, according to Japanese and Indonesian officials.

Jokowi's stay in Japan, which will also include a visit to Toyota Motor Corp.'s headquarters in Aichi Prefecture, is part of a weeklong trip that will also take him to China.

"It is significant that Japan is Mr. Jokowi's first foreign travel destination outside the Association of Southeast Asian Nations [ASEAN] solely for a bilateral summit since he became president last October," a Japanese Foreign Ministry official said. Jokowi visited China in November for a summit of the 21-member Asia-Pacific Economic Cooperation (APEC) forum.

In Monday's summit, Abe and Jokowi are expected to affirm a plan to promote talks between their defence and foreign ministers, the official said. Abe and Jokowi's predecessor, Susilo Bambang Yudhoyono, in December 2013 agreed to launch so-called "two-plus-two" security talks, but the two sides have yet to start the dialogue.

Abe and Jokowi plan to reaffirm co-operation in maritime security at a time when Indonesia is vowing to serve as a fulcrum between the Pacific and the Indian Ocean under Jokowi's maritime axis doctrine that calls for eliminating sources of conflict at sea such as piracy and violations of sovereignty.

In the context of ensuring regional peace and stability, the two leaders plan to urge China and several ASEAN member states such as the Philippines and Vietnam to address territorial disputes in the South China Sea based on international law, the Japanese and Indonesian officials said.

Abe plans to offer low-interest yen loans to assist construction of what would be a second MRT line in the Jakarta metropolitan area as part of efforts to ease serious traffic congestion, according to a Japanese news report.

The total cost of construction, maintenance and control of the envisaged 32-kilometer MRT system linking the eastern and western parts of Jakarta will amount to ¥100 billion (S$22.1billion), the Sankei Shimbun newspaper said in its Saturday edition.

The first MRT system linking the north and south of the capital is under construction with Japanese loans.

On Tuesday, Jokowi, a former Jakarta governor, will address a business forum in Tokyo and have a luncheon with Japanese business leaders, according to the Japanese Foreign Ministry.

Japan is the second biggest investor in Indonesia after Singapore, with about 1,440 Japanese companies operating in the country as of 2013, according to Indonesian data. Japan is the largest export market for Indonesia, followed by China and Singapore, while China is the biggest origin country of imports, followed by Singapore and Japan.

On Wednesday, Jokowi will travel to Nagoya in central Japan by shinkansen bullet train to visit the Toyota headquarters. The shinkansen could be an option for an Indonesian high-speed railway project to connect Jakarta and Surabaya.

Before departing for Tokyo, Jokowi told a press conference in Jakarta that his visits to Japan and China are meant to follow up on his talks with Abe and with Chinese President Xi Jinping on the sidelines of the forum in Beijing last year.

"We want to speed up our infrastructure development and revitalisation, increase investment and boost maritime industry," Jokowi said.

"Indonesia's economy is now in the fundamental process of transition from the economy depending a lot on raw commodity exports to the economy that creates adding values, from the consumptive economy to the productive, investment-oriented one," he added.

According to the Indonesian leader, Japan and China are among the top investors in the Southeast Asian country and there is a possibility for them to make large-scale investments in Indonesia.

"In the past 10 years, many big industries have moved some of their factories from Japan, South Korea and China to Southeast Asia and the trend may continue," the president said.

He expressed hope that during his visits, he could concretely explain how Indonesia has been improving its infrastructure either in energy, highway, ports and one-stop service for investment permits to attract foreign investors.

Earlier, Franky Sibarani, chairman of the government-appointed Investment Coordinating Board spoke about Toyota's plan to make a big investment in the automotive industry in Indonesia.

Last week, a top government official at the Trade Ministry told Kyodo News that Toyota has expressed interest in investing about USD$1 billion (S$1.3 billion) in Indonesia. "The $1 billion will be invested to develop and expand the existing factory [of Toyota in Indonesia] and the investment will focus on producing export-oriented vehicles," Sibarani said.

"The government will assist [Toyota] with a number of facilities, such as tax incentives," he said.