SHAH ALAM - The Attorney General's Chamber (AGC) has rejected the representation by Vietnamese Doan Thi Huong to have the murder charge against her dropped, the High Court heard.

The matter was communicated by Doan's lawyer, Hisyam Teh Poh Teik, during proceedings here on Thursday (March 14).

Doan's defence had sent in a letter of representation, following the release of Indonesian Siti Aisyah on Monday (March 11).

Both women were accused of the murder of North Korean Kim Jong-nam, half brother of its leader Kim Jong-un. 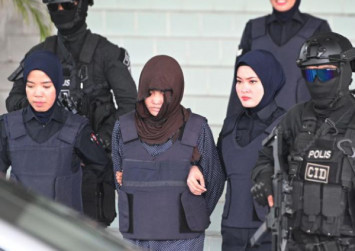 "It is very obvious, my Lord, that the Attorney General has favoured one party over the other, bearing in mind that this court has found a prima facie case against both of the accused," he said.

Hisyam said that both accused ran the same defence.

"Both have stated, through their counsels, that they were doing video pranks.

"Both maintained, through counsels, they were made scapegoats by North Korea. The public prosecution has not acted fairly," he added.

Doan was supposed to take the stand in the defence trial today (March 14).

Wearing a red shawl, the 30-year-old appeared pale and tired.

Hisyam asked for the court to allow a postponement, as Doan was not fit to take the stand.

"She has only slept an hour at night since the event on Monday (Siti Aisyah's release).

"We are now at a crucial part of the defence case, where she will testify. I ask my Lord to show her mercy and compassion and to give her some space," he said.

Justice Azmi Ariffin then asked the accused directly if she was facing any problems.

Doan answered, through an interpreter. "I am very tensed and stressed".

DPP Muhamad Iskandar Ahmad said principally, the prosecution would object to a postponement.

"But, looking at the condition the accused is in today, she is in no shape to testify.

"We do not have any objection to the postponement," he said.

Justice Azmi then agreed to adjourn the hearing to April 1.

"I wish to carry on with this case, but unfortunately from my observation, looking at her, she is not well, mentally or physically.

"She must be given the opportunity to be attended by a doctor," he said.

The charge, under Section 302 of the Penal Code, provides for the mandatory death sentence upon conviction.