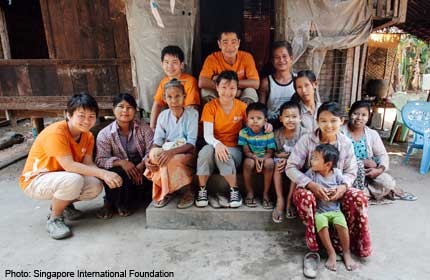 But his Tai Seng stomping ground of attap houses and small ponds is no longer around, culled in the name of progress. So the 48-year-old hopped on a jet plane to savour some childhood memories - in Myanmar.

There for five days with the Singapore International Foundation, Mr Kee said: "I went for (volunteer) work and play. It was a lot of fun because the things that everyone did came from the heart."

For the father of a teenager, fun meant building water storage tanks in the April heat and ducking a few of the falling bricks he had helped put up.

His oldest "student" - a toothless grandmother in her 80s - had a special reason for wanting to wield the toothbrush.

"She wanted to teach her grandchildren how to brush their teeth," Mr Kee recalled.

"The community she lived in could not afford to buy a toothbrush or toothpaste, so when we were there distributing dental kits, she approached us with a huge smile."

Previously, villagers would rely on salt to clean their gums, a traditional method passed on over the years.

More home-grown businesses are also bullish about expanding into the country.

Already, Singapore is Myanmar's third-largest trading partner after China and Thailand. Last year, Singapore invested US$49.2 million (S$62 million) in Myanmar, and there is a growing number of local businesses eager to do business there.

The UOB Regional SME Insights Survey 2013 showed half of the 200 small and medium-sized enterprises here saw Myanmar as an expansion opportunity. Only two in five of their regional peers reported similar confidence.

Despite the interest and business possibilities in Myanmar, Mr Ian Wong, UOB's managing director and international head, said many companies are "unfamiliar with the business and regulatory landscape in the country".

More than 70 per cent of the 52 million population live in the rural countryside, with limited access to clean water and basic health facilities. Wages are low, with a general worker earning US$2 or less daily.

Still, for volunteers like Mr Kee, the chance to make a difference - no matter how small - is enough to make him return.

He said: "We can provide the hardware like water tanks but it's the software that's more important. For instance, is what we taught the villagers enough to ensure longevity? Will the knowledge we passed on be spread around, so that they continue to benefit long after the volunteers leave?"