Junta will steer clear of legal case against Yingluck 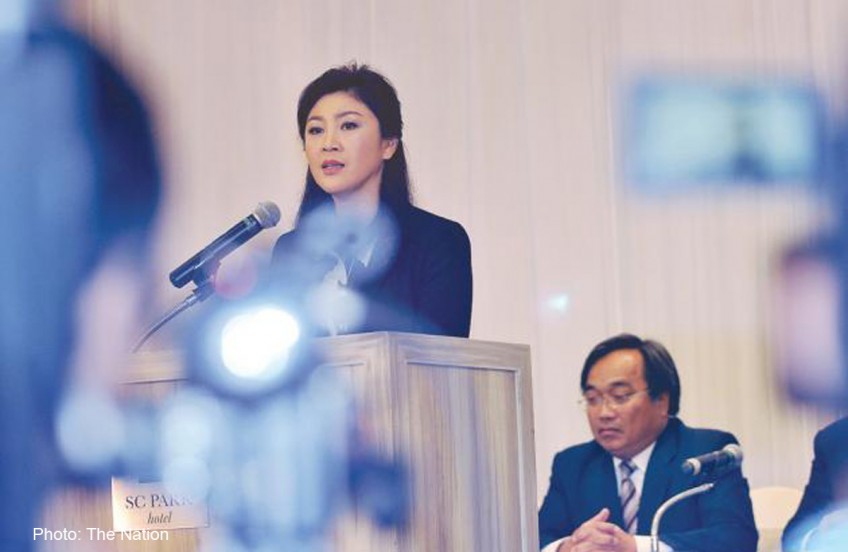 Former prime minister Yingluck Shinawatra hit out at the National Anti-Corruption Commission at a press conference. She claimed that its handling of the rice-pledging case was biased against her.

The junta will not intervene in the prosecution of former prime minister Yingluck Shinawatra - who faces a criminal charge of misconduct and negligence over the rice pledging scandal, the deputy head of the junta Air Chief Marshal Prajin Juntong said yesterday.

The ruling National Council for Peace and Order (NCPO) had a clear will not to intervene in the judicial system, he said.

The national anti-graft agency decided on Thursday to submit a case to the Attorney General to indict Yingluck in the Supreme Court's Criminal Division for Political Office Holders for negligence in countering corruption in the rice scheme.

The decision came shortly after news the former PM had sought and received permission from the junta to travel abroad next week.

Asked if the junta would change its mind because Yingluck may go to see her elder brother and former PM Thaksin in Europe, Prajin said the NCPO would not interfere with her planned trip, but would closely monitor if she complies with pre-condition set by the junta.

"It will be fine if everything goes along with the line and framework to have unity in the nation," he said.

Vicha Mahakun, a member of the National Anti-Corruption Commission (NACC) who oversaw the case, said his agency had no authority to block Yingluck's plan to go abroad. What the anti-graft body had to do now was file the case to the Office of the Attorney General, he said, noting that the case would be filed next week. But it was impossible to speed up and lodge the case in the two days (before she departs), he said.

At a press conference yesterday, Yingluck hit out at the NACC, alleging that its handling of the rice-pledging case discriminated against her. She questioned if the agency's enquiry process met international standards.

"It took only 21 days to notify me of the charges and within 140 days, it resolved that I'm guilty as charged - something that has never happened in other cases," she said.

She claimed the NACC chose to hear witnesses who opposed her government. The resolution was also reached without waiting for the junta's check of national rice stocks to be completed.

The former PM denied planning to escape legal prosecution over the rice pledging case, saying she planned her Europe trip long before the anti-graft agency decided to prosecute her.

In the press statement, Yingluck said the trip was personal. "I am now an ordinary person and I should have the same rights as all Thais. I hereby affirm that I will not abandon Thais and will be ready to return to Thailand," it said. The conference was held at her SC Park Hotel.

Yingluck's lawyer Pichit Chuenban said the legal team would do its best and was confident of defending her in court. They would try to bring eight other witnesses, aside from those probed by the NACC, to testify in court.