Preacher Fuadh Naim (in red) tells Muslims to stay away from South Korean popular culture, including its drama and music, at a forum in Jakarta on Tuesday.

A preacher popular on social media, Fuadh Naim, has told Muslims to stay away from South Korean popular culture, claiming that its drama and music exposed people to lesbian, gay, bisexual and transgender (LGBT) lifestyles and free sex.

Fuadh, who admitted that he was previously swept up by the Korean Wave, said LGBT imagery, such as "skinship", a Korean term that refers to close physical proximity between male idols, was commonly seen on stage and beyond.

Instead of feeling uneasy about such behaviour, fans were excited to see their idols touch each other, the preacher said.

Some K-pop fans have a hobby of producing fan fiction or fan art, some of which depicts skinship among K-pop idols of the same sex.

Fans usually coin nicknames for idols that they like, like "Chanbaek" for Chanyeol and Baekhyun of boy band EXO; and "Jihope" for Jhope and Jimin, members of K-pop sensation BTS.

"[The Korean Wave] offers something interesting, and refreshing like water, which actually draws Muslims into the fire [of hell]," Fuadh said during a kajian (Islamic learning forum) at a mosque in South Jakarta on Tuesday.

"Starting from today, let's move on and pour our hearts out for Allah and his prophet Muhammad." 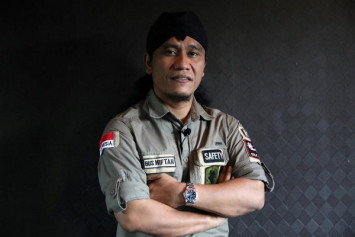 Fuadh, who has over 55,600 followers on Instagram, is campaigning against the Korean Wave and asking Muslim fans of K-pop to repent.

A spiritual student of famous preacher Felix Siauw, a Chinese-Indonesian who converted to Islam, Fuadh has visited 30 cities across the country to deliver his message. He said he planned to visit a lot more places soon.

"I get support from many people who share concerns about our young generation's morality," Fuadh told The Jakarta Post after the forum.

Ridha Nadhira Febyani, who came to Jakarta from neighbouring city Tangerang in Banten, said she attended the forum because she was curious about how Islam looked at "fangirling", or a woman's tendency to worship an idol.

"I will abandon the habit of watching K-drama or listening to K-pop," said the 19-year old, who was a fan of Korean boy band Big Bang.