North Korea's Samjiyon Orchestra members and South Korean singer Seo Hyun perform during a concert at a national theatre in Seoul on February 11, 2018.

One of the highlights of the performance, which took place at the National Theater of Korea on Sunday, was inarguably the surprise appearance of K-pop star Seohyun. The 26-year-old is a member of Girls' Generation, one of the most popular South Korean girl groups worldwide.

Donning a white dress, she joined the North Korean performers on stage, and together the singers sang the final two songs of the show: "Let's Meet Again" and "Our Wish," both of which feature the two Koreas' collective yearning for unification.

Among those in attendance were South Korean President Moon Jae-in with his wife and Kim Yo-jong, the sister of North Korean leader Kim Jong-un. The Korea Herald looked into some of the details of the performance, including the organizer's choice of music as well as the K-pop star who reportedly was contacted at the last minute by Cheong Wa Dae to be part of the historic performance. 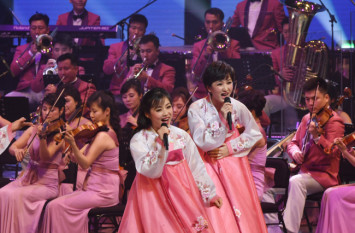 The K-pop star: Why Seohyun?

Seohyun made her debut as one of the youngest members of Girls' Generation, in 2007. The band enjoyed enormous popularity both at home and abroad, with hits such as "Gee," "Tell Me Your Wish" and "Hoot."

The group has been appreciated for its synchronized choreographies and catchy numbers, as well as each of the bandmates' unique charms and personalities. Seohyun has been seen as relatively reserved, shy and hard-working, also managing to establish herself as a musical actress.

Last year, the singer left S.M. Entertainment, one of the most powerful agencies in South Korea, while announcing that she will continue being a member of Girls' Generation. In spite of leaving S.M., she still remains one of the most successful K-pop figures in the local entertainment industry.

Culture critics and experts say her reserved personality, her departure from S.M. Entertainment and other related factors may have made her among the best candidates for Sunday's show. 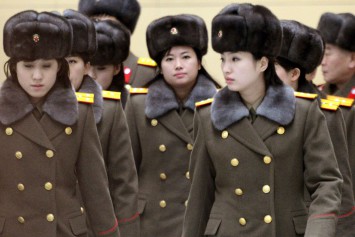 "I don't think big entertainment agencies such as S.M. Entertainment would want to be involved in a show like the one on Sunday," Lee Moon-won, a culture critic based in Seoul, told The Korea Herald.

"It's risky for firms like S.M. to be involved with things that are related to North Korea. Seohyun is no longer with them, but she's still very popular at home and abroad. And I guess that made her much more accessible and approachable for the organizers of the performance. They needed a K-pop star who is known worldwide to bring attention to Sunday's event."

Ha Jae-keun, another culture critic, said it's Seohyun's "relatively conservative" personality and appearance that may have influenced the organizers' choice.

"I don't think they would've chosen a K-pop star who looks too different from the North Korean performers," he said. "Seohyun still has that glamour of a K-pop actress, but she also gives off this vibe of a hard-working, well-mannered young woman. I guess that made her overall a very safe choice for an occasion like this."

The Song: "Our Wish"

One of the final songs of the performance, which Seohyun took part in along with the North Korean performers, was "Our Wish." The song was released in 1947, before the two Koreas were divided.

The song was written by composer Ahn Byeong-won during the period of Japanese rule, who wished for Korea's independence from the colonial power.

The lyrics, which currently starts with a line that says, "Our wish is unification," was initially "Our wish is independence." The song's original lyrics were revised to the current version in 1948, when the country was divided prior to the Korean War (1950-53).

According to local media reports, the song was not as well-known in North Korea until 1989, when Lim Su-kyung, then a university student, made a controversial visit to Pyongyang to attend the 13th World Festival of Youth and Students there. She made the trip without obtaining permission from the South Korean government.

When Lim met with the North Korea's former leader Kim Il-sung, she sang "Our Wish" in front of the crowd in Pyongyang. Lim, who later became a politician in South Korea, became a sensational figure in both Koreas, reportedly making the song very popular in the North as well. She was arrested for violating the National Security Law upon her return to Seoul and sentenced to five years in prison.

According to local media outlets, "Our Wish" was also featured during the 2000 summit in Pyongyang, where South Korea's former President Kim Dae-jung met with North Korea's counterpart Kim Jong-il, the father of Kim Jong-un. They reportedly sang the song together during the three-day event, the first inter-Korean summit after the Korean War.

"I can't really think of any other songs for an occasion like this," said Lee. "The song has historical value. The fact that it was composed before the division of the two Koreas, when the country was in fact one country, makes it a safe and meaningful choice overall."