Chen Jingwen
AsiaOne
W.T.M. Why This Matters
Karaoke lounge worker Priyanuch Nonwangchai is a prime suspect in a gruesome murder, which saw the victim's body being cut in half. But media reports on the case and photos of the attractive woman have turned her into an internet sensation and a teen idol for schoolgirls - something which has alarmed society watchers.

Within a few days, a karaoke bar girl has became an overnight celebrity of sorts in Thailand fueled by the latest news and gossip about her in the media across all platforms.

The fascination with Preaw, whose full name is Priyanuch Nonwangchai, since last week, has become so frenzied that society watchers and academics were not just bewildered but alarmed.

You see, Preaw is a prime murder suspect. And the killing wasn't an ordinary one. The victim's body was sawed in half before the parts were dumped in two buckets in a forest in Khon Kaen province last month.

The police believe the murder on May 23 was part of a revenge plot against a fellow lounge girl by Preaw and her accomplices because they believed she had tipped off authorities about Preaw's boyfriend who was arrested for drug-related charges.

For those of you who have not followed this high-profile murder case closely, below are five reasons for Preaw's sudden fame, which has also reached foreign shores.

Looking like a Thai pop princess, the 24-year-old reportedly worked at a karaoke lounge in Myanmar for a few days before she surrendered with alleged accomplices.

She could be mistaken for a model or TV star with her photogenic face, trendy dressing, long tresses and numerous tattoos. Her photos have been widely circulated on social media.

Her good looks were also compared to that of the victim - karaoke lounge singer Warissara "Amm" Klinjui - whose photos of her in revealing clothes also went viral.

2. Twists and turns, and fake news

Preaw fled to Myanmar with two alleged accomplices - Kawita Rachada and Apiwan Satayabundit - following the alleged crime. But they surrendered to Myanmar authorities in early June and were deported to Thailand.

Four of the five suspects are facing the death penalty after police pressed premeditated murder charges against them.

The gruesome crime itself made gripping news but rife speculation on various aspects of the deed as well as fake news continued to grip public attention.

For instance, reports linking the murder to drug smuggling turned out to be false although Preaw has had a record on drug-related offences.

Two police officers in Chiang Rai could not resist taking photos with a smiling Preaw after she was handed over by Myanmar officials. Their photos went viral very quickly. The officers were punished and transferred out of their posts.

The police also came under fire when the public were shocked to see the suspects being allowed to smoke, put makeup and walk around unrestrained in the company of officers in photos that went viral on social media.

Then the police came under the spotlight again when it was reported that 90 cops were involved in arresting Preaw and the two suspects.

A government watchdog found it hard to believe that so many officers were involved even though the arrest report showed all their names.

News about her private life, her pals and enemies were eagerly lapped up, even when they came from questionable sources.

Many people think she's rich as her photos show a luxurious lifestyle on her social media account.

She also reportedly expressed her gratitude to her family by sending them large amounts of money.

Gossipy news on her accomplices also helped to popularise their saga as if it's a running drama series. For instance, it was reported that one of her accomplices had millions of baht in her bank account.

5. Her frequent 'personal' trips to Singapore

The police revealed that Preaw often travelled to Malaysia and Singapore for work which was described as her "private matter" by one officer.

"She said she wanted to have money just like others. She has to take care of her parents," Gen. Chakthip Chaijinda was quoted as saying in a report on KhaoSod news site. 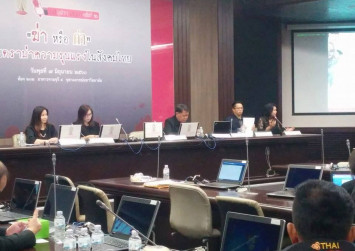