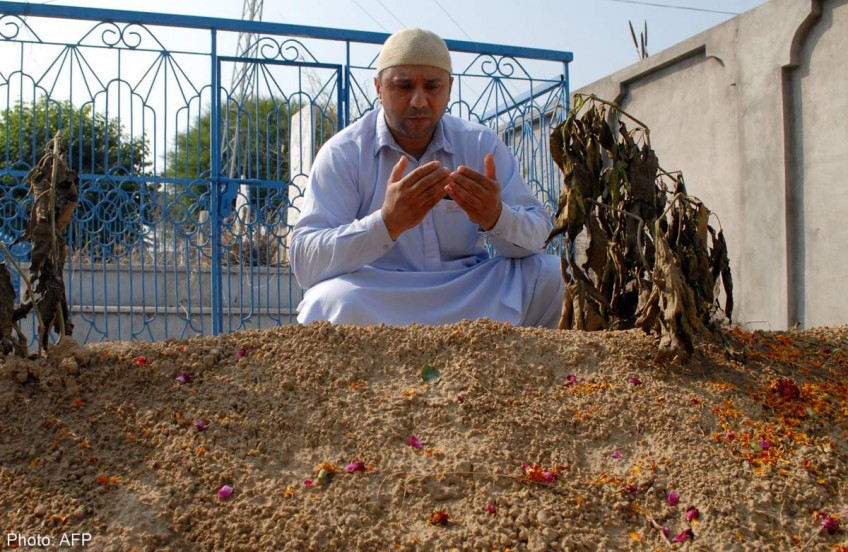 Shakeel Hussain, eldest son of Jumma Khan, prays at the grave of his father in Mirpur. Pakistani police are investigating whether a jealous wife ordered the recent murder of an elderly British man in Kashmir, in a case that spotlights polygamy among dual nationals in the region.

MIRPUR - Pakistani police are investigating whether a jealous wife ordered the recent murder of an elderly British man in Kashmir, in a case that spotlights polygamy among dual nationals in the region.

Jumma Khan, 70, was shot on the doorstep of his home in Mirpur, in Pakistan-administered Kashmir, the ancestral hometown of much of Britain's large Pakistani community.

Khan's family claim the second of his three wives -- who was in England at the time -- arranged the October hit.

Senior police official Raja Azhar Iqbal told AFP that Khan's eldest son from his marriage to his second wife, as well as two of the wife's brothers, have been arrested and bailed in connection with the killing.

"We are investigating the case on two aspects, property and love jealousy," Iqbal said.

"We have not reached any firm conclusions but it is likely that his third marriage could be the reason for his death."

Khan's matrimonial career began when he married his cousin Fatima Bibi in 1963, fathering six children, who live in Britain. In 1981 he divorced her and married Zubaida Bibi, having four more children with her.

Then, in May, he took another wife -- Asia Bibi, 40, from the garrison city of Rawalpindi. It was at this point friends say Khan began to fear for his safety.

Neighbours say Khan, who lived in the northern town of Wakefield in Britain, used to go to mosque for prayers five times a day when he was in Kashmir, but after his latest marriage was rarely seen outdoors.

His younger brother Haji Mohammad Ilyas, who arrived in Kashmir from Britain after the murder, said Khan was a pious man with no obvious enemies in Pakistan.

"When he returned to Britain after his third marriage, his relations with his second wife worsened. He quit his house in the UK and started living with a friend," he told AFP.

Shakeel Hussain Jumma, 40, Khan's son from his first marriage, said his father had developed "serious differences" with his second wife.

"During a family function in Britain, people heard his second wife making veiled threats to him," Jumma said.

Mohammad Imran, the eldest son from Khan's second marriage who has been bailed over the murder, vehemently denied his side of the family had anything to do with the killing.

"We are innocent. We are not involved in the murder of our father," the 28-year-old told AFP.

Islam permits men to take up to four wives and while polygamy is illegal in Britain, in practice there is little the authorities can do to prevent people taking additional spouses in ceremonies overseas.

It is not uncommon for elderly, well-off British Pakistani men to take additional wives from Mirpur, with the promise of British nationality.

According to lawyer Mohammad Yasin, who deals with such cases, the women often face a bleak future, with many husbands not returning to Pakistan after going back to England.

The husbands typically spend a few months with their new wives before abandoning them. In most cases they do not maintain contact and, in some, the wives give birth to children who then do not see their fathers.

Ghazla Kauser, 30 is one such case. She married 37-year-old Chaudhry Amraz Khan four years ago.

He spent three months with his wife and then went back to England. Kauser was pregnant and gave birth to a baby girl named Mariam, now three years old.

"She always asks about her father, but I have nothing to tell her. He has no contact with us," said Kauser, tears rolling down her cheeks.

In a highly conservative Islamic society like Pakistan, tongues wag about mothers with absent husbands, and Kauser says she has had a tough time.

"I went to my in-laws in my husband's home town, but they treated me badly and kicked me out of the house," she said.

Another Kashmiri girl Zara Bibi, 26, says she married a British national in 2001, at the age of just 13 -- illegal in both countries.

"My husband did not meet the legal requirements for me to get British nationality, so they sent me back to Pakistan, deceiving me that my mother was ill," she said.

"Now I cannot go back to England to see my son. My son is now nine years old," Bibi told AFP.

Mohammad Yasin, the lawyer, said the problem extended to hundreds of women in the region.

Yasin the lawyer said there were hundreds of women suffering a similar plight.

The British High Commission in Islamabad said it was providing consular assistance to Khan's family over the murder.

But officials said the "tragic" issue of wives abandoned by their husbands was beyond their remit.

"It is difficult to offer any practical assistance to the victims since it often involves Pakistani nationals in their own country and is therefore very much a matter for the local authorities," a spokeswoman said.