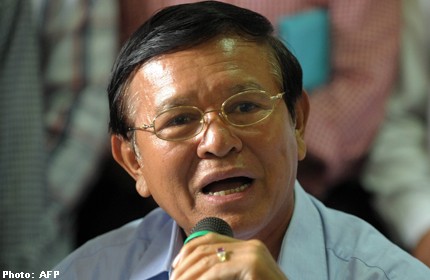 Kem Sokha, vice president of the opposition Cambodia National Rescue Party (CNRP), speaks to the media during a press conference at CNRP headquarters in Phnom Pen.

His comment came after Prime Minister Hun Sen yesterday warned of legal action against him after accusing him of trying to overthrow his legitimate government and the Cambodian People's Party (CPP) when Kem Sokha confessed to supporters in the USA that he failed to remove the CPP government from power after general elections in 2013.

Speaking yesterday at a groundbreaking ceremony for national road 58 in Poipet, Hun Sen said that "Now the story was revealed. I used to say that there was a bid to topple the legitimate government after elections, and now someone appeared to confess that he tried to overthrow the CPP government, but failed."

"What legal action should we take when thief and thief boss confessed," he said, asking those who lost property during the post-election massive protests to find and arrest that person and demand money from him.

Regarding this issue, Kem Sokha who is currently in the United States, denied allegation, saying that he didn't use the word 'topple', but 'change'.

"I would like to verify to all compatriots that Samdech Hun Sen could have received confused reports or because reporters took my words and didn't say the truth. I never used the world 'topple the government or ruling party," Kem Sokha told Khmer-language Radio Free Asia yesterday night.

"Not only words inside my heart, but also in my policy, I never used violence and never thought of topple," he told the US-funded radio.

"Everything I did was always non-violent, and I always fought against those who used violence," he said.

"What I said was aimed to telling supporters not to be resentful that CNRP could not make proper change in accordance with what they wanted."

"I already confirmed that we could not make change through violent protest because CNRP policy was non-violent. Therefore, he had to turn to negotiation and the negotiation could not make 100 per cent as what we wanted," he told the radio.

"I confessed to that point that we could not make change, and change election to 100 per cent like what we wanted," he said, adding that I never ever said the word 'topple'.