It has been 24 years since North Korean founder Kim Il-sung died, but the face of the man who started the reclusive regime has sparked furor among Koreans with the "Kim Il-sung mask" controversy.

The unified Korean women's hockey team -- the first unified Korean team in the Olympics -- faced Switzerland in a well-fought, but ultimately defeated, match. During the game, the group of supporters from North Korea were seen cheering the unified team while wearing a mask of a young man.

After the image emerged, suspicions that the mask bore the picture of a young Kim Il-sung surfaced among South Koreans. It was further fueled by those disgruntled by the participation of the North, which has been aggravating regional tensions with its ballistic missile and nuclear programs. 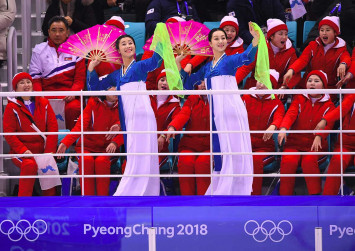 The South Korean Unification Ministry attempted to put out the fire early by saying Sunday the face was not that of the current North Korean leader Kim Jong-un's grandfather.

"(The ministry) informs you that the mask used by the North Korean supporters during the women's' ice hockey match was a 'handsome man's mask'," the ministry said in its statement.

According to the ministry, which quoted North Korean officials, the mask bears the image of a generic good looking man and is used similarly to the mask in "Talchum," the Korean traditional mask dance.

But it has done little to appease those calling this year's Olympics the "Pyongyang Games."

"Will they (the ministry) say it's not Kim even after seeing the picture of the younger Kim? Even the hair is identical," said Ha Tae-kyung of the minor opposition Bareun Party.

"Do you have to lie when it is clear that it is a Kim Il-sung mask? Do you want to make PyeongChang Olympics a 'lie Olympics'?" he said, taking a jab at the Seoul government's slogan to make the games "Peace Olympics."

The ruling Democratic Party of Korea released a statement saying that decrying such comments as a political seeks to tarnish the legacy of the Winter Games.

"Considering the North Korean system and culture, it is impossible to use Kim Il-sung's face -- which is held in the highest dignity -- for cheering for their team," said Rep. Back Hye-ryun, spokesperson for the ruling party. "The Unification Ministry has directly made an inquiry to the North Korean cheering squad and confirmed that it was not a Kim Il-sung mask."

Many experts on North Korea say that it is unlikely that the North Koreans have made a Kim Il-sung mask, given the fact that he is the most revered figure in the country.

"In North Korea, Kim Il-sung is a 'divine' figure. Christians generally don't cheer with a Jesus mask, and Muslims don't wear mask of Allah (in such events)... It is hard to imagine making Kim's face into a mask in North Korea, where losing a Kim Il-sung badge was a sin that could land you in a concentration camp," Cha Du-hyeogn, a visiting research fellow at the Asan Institute for Policy Studies, wrote on his Facebook page. "It's more likely that the image is that of a star in North Korea... They (North Koreans) don't use Kim Jong-un's face, would they use Kim Il-sung's face? Really?"

Yang Moo-jin, a professor at the University of North Korean Studies, echoed Cha's view that the image is unlikely to be that of Kim.

"It is more likely that by using the face of a handsome man that the North Korean supporters are challenging the wide-spread idea of 'Namnam-booknyeo' (good looking men come from the South and the beautiful women come from the North)" he told local media.

Meet the 200-strong 'army of beauties' from North Korea