SHAH ALAM, MALAYSIA - Two women accused of the Cold War-style assassination of the half-brother of North Korea's leader in Malaysia will go on trial in October, a judge said Friday.

Indonesian Siti Aisyah and Vietnamese Doan Thi Huong are accused of rubbing highly toxic VX nerve agent in the face of Kim Jong-Nam as he waited to board a plane at Kuala Lumpur's main airport in February.

The women, who may face the death penalty if convicted, deny carrying out the killing and say they were duped into believing they were taking part in a reality TV show.

Seoul accuses North Korea of being behind the murder of Kim Jong-Un's estranged relative, which sparked a serious diplomatic row between Malaysia and the North. Pyongyang denies the allegation.

At a heavily guarded court outside Kuala Lumpur, the women arrived wearing bullet-proof vests and handcuffs, and were taken past a waiting pack of journalists.

Judge Azmi Ariffin told the 30-minute hearing at the High Court in Shah Alam that the trial would begin on October 2 and would be completed within about two months.

"I am making a ruling that both the cases will be tried jointly," he told the packed courtroom.

The two accused were brought into the courtroom in handcuffs wearing traditional Malaysian dresses.

They looked nervous but occasionally smiled to their lawyers and embassy officials.

After the hearing, Aisyah, 25, started sobbing, and one of her lawyers patted her back to calm her down.

Prosecutor Muhammad Iskandar Ahmad said 30 to 40 witnesses would be called. The women's lawyers said they would enter pleas at the start of the trial in October.

The assassination, which happened just as Kim was about to board a flight to Macau from the airport's budget terminal, sent tensions soaring between Pyongyang and Kuala Lumpur.

Both countries expelled each other's ambassadors and barred their citizens from leaving, and an Asian Cup qualifier football match between the nations was postponed.

Tensions eased when Malaysia agreed to return Kim's body, which was sent back to Pyongyang accompanied by three men initially named by Malaysian police as murder suspects. 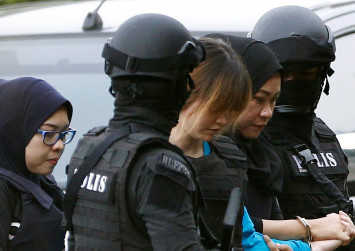 Under the terms of that agreement, nine Malaysians prevented from leaving Pyongyang were freed.

Police are still trying to trace four North Koreans suspected of having taken part in the murder plot but who are believed to have returned to their capital immediately after the killing.

Hisyam Teh Poh Teik, a lawyer for the 29-year-old Vietnamese suspect, said the defence teams were Friday handed CCTV evidence of what happened at the airport.

The women's legal teams had previously complained that they were not provided with key materials which would allow them to mount a proper defence.

"We will ensure the rights of the accused are served," the lawyer said, adding that Huong was "well and fine".

The murder in Kuala Lumpur removed a potential claimant to the leadership of the reclusive nation - Kim Jong-Nam was late leader Kim Jong-Il's first born - who was an embarrassment to Pyongyang.