Citing Park Sang-hak, who leads an organisation of North Korean defectors, the Sankei Shimbun said that Adrian Hong Chang, leader of the group that led infiltrated the North Korean embassy in Spain in February, told Park that he had sounded Kim out on leading a government-in-exile. Kim refused, saying he wished to "live quietly."

According to the report, Hong Chang said Kim Jong-nam's son Han-sol now lives in the outskirts of Washington D.C.

In around 2008, Hong Chang, then an activist dedicated to North Korean human rights, along with two people, including Park, met with Hwang Jang-yop, the highest-ranking North Korean defector to date, and asked him to be the president of a government-in-exile, but Hwang flatly refused, the Sankei said.

Six years later, Hong Chang met with Kim Jong-nam and made the same request, but Kim said: "(I) don't do such things," according to the report. 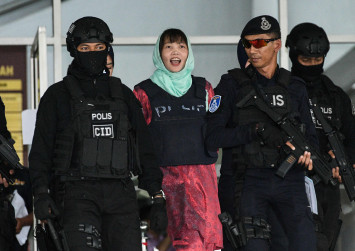 Kim was murdered at Kuala Lumpur International Airport in February 2017.

In March 2017, Han-sol appeared in a Youtube video, saying he and his family were safe. A group that called itself "Cheollima Civil Defence" claimed that they had moved Kim's family to a safe place.

In a lecture Hong Chang gave in the US in June last year at the US government's invitation, he said he brought Kim Han-sol, his mother and sister to the US via Singapore and the Netherlands, and that he was with them throughout the entire trip, according to Sankei.

Hong Chang also claimed that Kim Han-sol was living in "the closest state from Washington D.C.," the newspaper said, adding that Kim mainly speaks in English as his Korean is not fluent, and that there is hearsay that he goes to a US college under FBI protection.

Hong Chang, who co-founded Liberty in North Korea (LiNK), a nonprofit organisation that helps North Koreans escape their homeland, was deported from China in 2006 after being detained with North Korean defectors.

He was named by Spain's High Court in March as the ringleader of 10 people who broke into the North Korean embassy in Madrid on Feb 22, and tied up the staff before taking off with computers and mobile phones.