North Korean leader Kim Jong-un appears to be expanding his diplomatic horizons in an apparent attempt to increase his bargaining power ahead of summits with the leaders of South Korea and the US.

On Sunday, Kim made an unexpected appearance with his wife Ri Sol-ju at a performance by a South Korean art troupe in Pyongyang, becoming the first North Korean leader to watch a show by South Korean musicians.

On Friday, Kim met International Olympic Committee President Thomas Bach in Pyongyang and thanked the IOC for its role in a dramatic thaw in inter-Korean relations. He also said he is committed to having his country participate in the 2020 Tokyo Summer Olympics and the Beijing Winter Games in 2022, according to news reports.

All the three summits, as well as his meeting with Bach, are known to have been offered first by Kim.

It is a remarkable shift following a year of mounting tensions, accentuated by North Korea's nuclear and missile tests last year.

The young leader made his debut in international diplomacy last week when he met with Chinese President Xi during a two-day visit to China. It was his first known foreign trip as a leader since taking power six years ago.

Analysts saw Kim's trip to China, the North's traditional ally and biggest economic partner, as an attempt to improve strained ties with China to gain leverage before its planned summit with the US, which is seen as waging a trade war against China.

Russian Foreign Ministry said that North Korea's Foreign Minister Ri Yong-ho could travel to Moscow in the near future. While Russia eyes economic co-operation with North Korea to secure a path to build natural gas pipelines through the isolated country, their close bilateral ties could also work in favour of the North's interests in terms of boosting its economy and finding a balance against influence from China and the US.

Japan, which has been at the forefront of the US-led pressure campaign against North Korea, also appears to be scrambling not to be sidelined in the process of resolving the North Korean nuclear issue to make sure its interests are protected. Japanese media reported that Abe had proposed a meeting with Kim. Japan has been seeking to rescue Japanese citizens abducted and detained in North Korea. 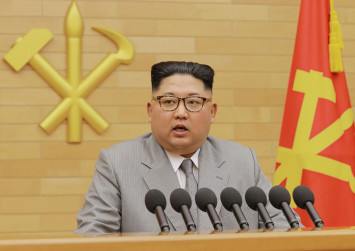 Kim might be trying to take control of the process and increase his bargaining power ahead of the planned summits, analysts say. The North might also be seeking to break out of its isolation by making the most of the momentum of dialogue on the peninsula and preparing itself in case talks with the US fall through.

"As Kim Jong-un made nuclear and missile provocations at an unexpected pace, he is pushing for a diplomatic offensive at such an unexpectedly fast pace to improve the North's relations with neighbouring countries," said Ko Myung-hyun, a research fellow at the Asan Institute for Policy Studies.

"But it is a typical North Korean way. The only difference is that Kim Jong-un is moving quicker and on a larger scale whatever he pursues -- whether that is a provocation or diplomacy," he added. "North Korea is increasing its bargaining power to appeal for its way of denuclearization at the upcoming summit with the US."

Kim pledged that he was "committed to denuclearization" of the Korean Peninsula, according to China's Xinhua News Agency, but demanded South Korea and the US take "progressive and synchronous measures for the realisation of peace."

But skepticism lingers over Kim's diplomatic offensive, with some claiming that the North is seeking to ease sanctions against the regime and buying time to perfect its nuclear and missile programs.

The US remains adamant that it will not take any of those measures unless the reclusive regime dismantles its nuclear weapons programs in a complete, verifiable and irreversible manner.

The North's upcoming talks with the South and the US are expected to shape the fate of the Korean Peninsula. If talks succeed, Korea and the US would agree on the path to denuclearization. If they fail, they could just go back to brinkmanship and military tensions could resurface on the peninsula.