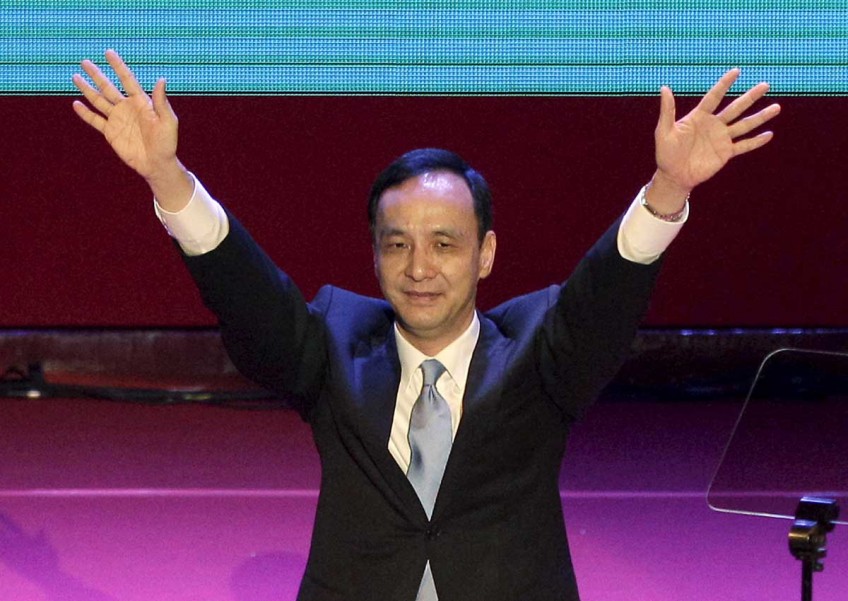 Slim and genteel-looking, Taiwanese politician Eric Chu - who holds a PhD in accounting - is not a person one readily associates with espionage action hero Ethan Hunt.

But with some humour, Mr Chu has evoked the Tom Cruise-portrayed protagonist of Hollywood movie franchise Mission: Impossible as he laid out the challenges that his Kuomintang (KMT) party faces.

"The KMT, right now, is like Ethan Hunt in Mission: Impossible, seeking to take on a seemingly impossible mission and win against overwhelming odds," said Mr Chu in an interview with local newspaper Liberty Times.

He may not be exaggerating. Mr Chu faces a daunting task in his battle to become Taiwan's next president.

Last Saturday, the 54-year-old, who is also the New Taipei Mayor, became the KMT's chosen candidate to contest the Jan 16 election. It has been a long, circuitous process, worthy of a political soap drama, if not a movie.

Long touted as a rising star and potential presidential candidate in the party, Mr Chu initially did not step forward to run as many expected him to. The KMT eventually plumped for deputy legislative speaker Hung Hsiu-chu, who represents the deep-blue, pro-unification faction within the Beijing-friendly party and had volunteered herself.

But Ms Hung failed to close the gap with Ms Tsai Ing-wen of the pro-independence Democratic Progressive Party (DPP) and, in a rather unsightly process last weekend, the KMT ousted Ms Hung and chose Mr Chu, who is also the party chairman, as its new nominee.

The whole debacle has taken some of the shine off Mr Chu.

Detractors accuse him of being an opportunist. He did not put himself forward earlier on, they charge, because he knew the political winds did not favour the KMT.

Now, he is portraying himself as the party's "saviour" who had wrangled for a leave of absence from his mayorship to campaign instead of having to resign the position.

Adding to his woes, he is now being questioned by prosecutors after being accused by opposition politicians of having tried to entice Ms Hung to drop out of the race by offering her bribes and other inducements.

Others contend that Mr Chu was done in by the factional politics that have split the KMT.

Mr Chu himself has said that he is now entering the fray to prevent "single-party dominance" in Taiwan's political landscape. This would happen if the DPP wins both the presidential and legislative elections, which would result in "the loss of checks and balances which would be unhealthy for Taiwan's democracy".

"I know my decision to run could result in much criticism, but I must do my part for the Taiwanese people and democracy," he told the Liberty Times.

Whatever the case, Mr Chu now faces an uphill task in wresting the presidency in three months.

Ms Tsai, 59, who is making her second run for the top job, has been riding the momentum of unhappiness directed at the KMT after seven years of the Ma Ying-jeou presidency, over a lacklustre economy and apprehension about warming cross-Strait ties.

Yet, Mr Chu cannot be taken for granted.

With few pickings in Taiwan's political scene, he remains one of its more credible figures.

Like his rival Tsai, he did a stint in the United States, getting his PhD and MBA in New York University and later, teaching at City University.

In 2009, at the age of 48, he became Taiwan's youngest vice-premier. During local elections last year that saw a KMT bloodbath, he was the only candidate from the party to win a mayorship, albeit with a narrower margin.

He is also well-connected. The father of two is married to the daughter of Mr Kao Yu-jen, former speaker of the now-defunct Taiwan Provincial Assembly and chairman of Twinhead International Corp.

Mr Chu's stance on cross-Strait relations will also be relatively reassuring to much of the middle ground.

He is clearly acceptable to the Beijing leadership as someone they can work with, in the interests of stable ties. In May, he met Chinese President Xi Jinping.

At the same time, Mr Chu has also been careful to strike a moderate tone, saying that he hews to the so-called 1992 consensus. It acknowledges that there is one China, but allows both sides of the Taiwan Strait to have their own interpretation of what that "China" means.

It will hardly be enough. But Mr Chu could put up a good fight, and - as the quote goes - life can be stranger then fiction.