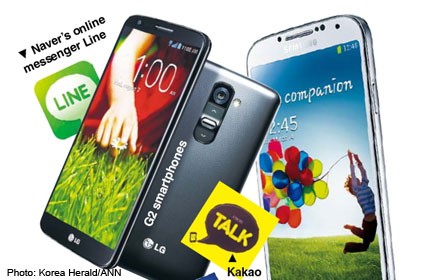 The economic achievement has been attributed largely to growth of manufacturing businesses and their exports, led mostly by large conglomerates.

In the early stages of economic development between 1948 and 1965, textiles, milling and sugar refining - called the three "white industries" - were promoted at government level.

Then started burgeoning in the late '50s and '60s, backed by the Five-Year Economic Development Plan touted by former President Park Chung-hee.

A slew of the nation's first products were developed by Samsung including the SCH-100 mobile phone and SPH-M100 MP3 mobile handset.

While going through the financial crisis of the late '90s, the business ecosystem changed as many conglomerates went bankrupt, leaving only those companies that relentlessly sought innovation survive.

After having long been seen as second-rate by markets and consumers, Korean-made electronics gadgets including TVs and mobile phones came into the limelight from in around 2000.

As of the second quarter of this year, around 760 million or 33 per cent of smartphone users worldwide use Samsung products while 121 million or 5.3 per cent use LG smartphones, according to research firm Strategy Analytics.

By unveiling the flagship smartphone lineup G2 in early August in New York - well known as a battlefield for the world's most advanced tech firms - LG is aiming to increase its market share and become one of the big three mobile manufacturers alongside Samsung and Apple.

With the smartphone market now saturated, many now wonder how the firms will weather the challenges they are facing.

Diversifying their product lineups from premium to low-end is one of their methods, but it will not take long, according to market watchers, before people see different and innovative products hitting the shelves.

LG and Samsung are also running in the race to capture the premium TV market as they rolled out UHD TV models and curved-screen TVs earlier this year.

IT and social networking firms are also thriving and competing for more global consumers.

More than 200 million people around the world communicate through mobile messenger Line, serviced by Naver, the largest Web-portal operator in Korea, and 100 million use Kakao Talk, the top mobile messenger in the domestic market.

Both firms are trying to increase their consumer base in regions including South America and Europe by servicing users with localised content and in local languages.