Korean Air Lines chairman Cho Yang Ho arriving at the Seoul Western District Court on Jan 30, 2015. Mr Cho apologised for the behaviour of his two daughters and said they would step down, on April 22, 2018.

The head of the nation’s flag carrier Korean Air on Sunday apologized for causing public concerns over the escalating “water rage” scandal involving his youngest daughter, and vowed to dismiss his two children from their executive posts, effective immediately.

“I would have Korean Air Senior Vice President Cho Hyun-min step down from all of her posts within Hanjin Group, as well as Cho Hyun-ah, president of KAL Hotel Network, resign as well,” said Chairman Cho in a written statement, released by the group’s communication office.

Cho also said he would have a figure from outside the family manage Korean Air. The chief of Hanjin Group and father of the two daughters whose behavior sent shock waves across the country, said he has named Seok Tae-soo, president of Hanjin KAL as the vice chairman of Korean Air. The decision was specifically made to meet growing demands on Korean Air to have a professional CEO -- not a member from the ownership family -- lead, he added. 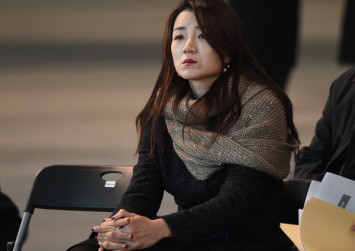 The chairman also pledged to strengthen the role of the boardroom and establish a compliance committee to “institutionally prevent” such incident from happening again.

Cho’s apology came amid the air carrier facing its worst public sentiment following a series of revelations that family members had abused power against those working under them. Speculations of smuggling luxury items also were raised. A number of whistleblowers claimed that the Cho family frequently smuggled luxury goods through employee-only passageways, abusing their positions in the nation’s largest air carrier.

Triggered by Cho’s youngest child Hyun-min reportedly throwing water at an agency official during a meeting, the “water rage” spread fast inside and outside the country, raising questions as to unqualified chaebol scions in executive posts. 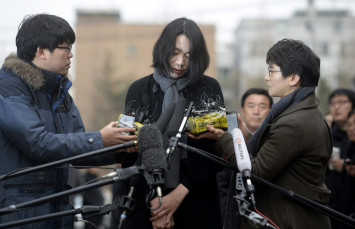 The chairman’s apology and instant dismissal of his own daughters have widely been seen as gestures to appease an angry public.

But a fresh allegation floated that the chairman himself had soundproofed his office last week.

“It is our understanding that the chairman ordered the renovations of his seventh-floor office,” an airline employee said. The company denied the notion, saying silicon had been used to fill in cracks in the door to the chairman’s office, and nothing more.

The alleged work of soundproofing the chairman‘s office was seen as Cho and the company rejecting to change a corporate culture in which bullying and some degree of verbal abuse may have been tolerated for years.

The chairman’s wife and head of the Ilwoo Foundation, Lee Myung-hee, has also come under fire for abusing subordinates in the past.