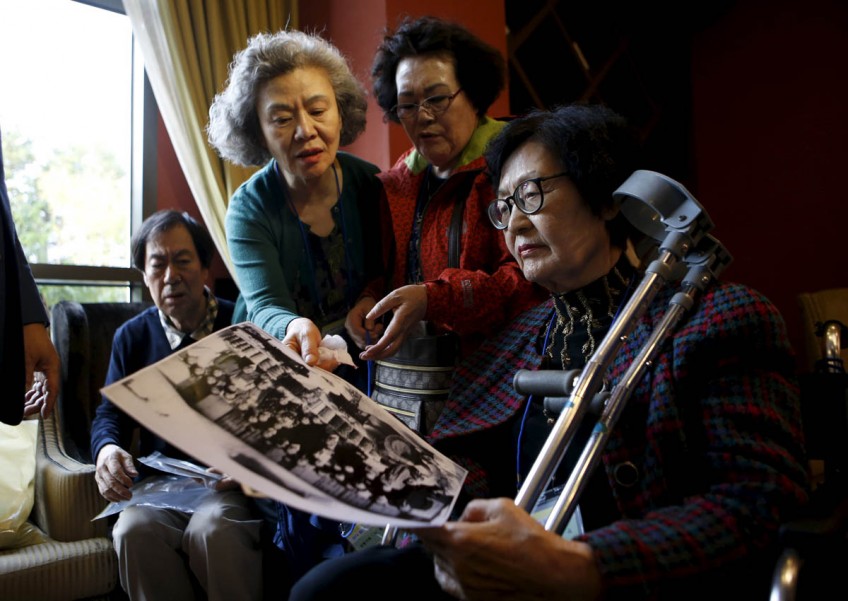 SOKCHO, South Korea - Almost 400 South Koreans - many of them elderly, some in wheelchairs, all in a state of nervous anticipation - gathered Monday before crossing into North Korea for a rare and emotional reunion with separated family members.

The reunion beginning Tuesday in the North Korean resort of Mount Kumgang will be only the second in the past five years - the result of an agreement the two Koreas reached in August to ease tensions that had pushed them to the brink of armed conflict.

Millions of people were displaced by the sweep of the 1950-53 Korean War, which saw the frontline yo-yo from the south of the Korean peninsula to the northern border with China and back again.

The chaos and devastation separated brothers and sisters, parents and children, husbands and wives.

"We were separated at the beginning of the war when I was just nine years old," Choi Kum-Sun, 75, said of her elder brother in the North.

"I had no idea that he was still alive, but then I got the notification that he wanted to see me. I still can't believe it," she wept.

Like a significant number of the elderly or infirm participants, Choi was in a wheelchair. She told AFP she had packed clothes, food and US$1,000 (S$1,400) in cash to take as a gift.

Because the conflict ended with an armistice rather than a peace treaty, the two Koreas technically remain at war and direct exchanges of letters or telephone calls are banned.

The reunion programme began in earnest after a historic North-South summit in 2000, but the numbers clamouring for a chance to take part have always far outstripped those actually selected.

The 394 people gathered in Sokcho city on South Korea's northeast coast were called to the reunion by 100 North Koreans chosen to take part in the event.

All were to spend the night in a local resort before an early start to the heavily-fortified border nearby and then on to Mount Kumgang.

Over the next three days, they will sit down with their North Korean relatives six times - both in private and in public.

With more than 65,000 South Koreans currently on the waiting list for a reunion spot, they represent the lucky few, although the event itself is very bitter-sweet.

Each interaction only lasts two hours, meaning the family members have a total of just 12 hours to mitigate the trauma of more than six decades of separation.

And for those in their 80 and 90s, the final farewell on Thursday after three days is tainted by the near-certainty that there will never be another meeting.

"I have mixed feelings," said 90-year-old Hong Rok-Ja who, together with her sister, was going to meet her brother who had gone missing in 1950.

"Of course I want to see him, but I'm so worried I won't recognise him or that I'll be too excited to say anything," Hong said.

"There is so much I want to know," she added.

Kim Nyun-O, 85, confessed to being so over-excited that she had to take a mild sedative in the morning before travelling to Sokcho.

She came with her three sisters for a meeting with their brother who had been drafted into the North Korean army in 1951.

"We were so shocked to find out he was still alive. Shocked but incredibly happy," Kim said.

After arriving at the resort in Sokcho, the family members were given an "orientation session" by South Korean officials to prepare them for the next three days.

Pyongyang has a lengthy track record of manipulating the divided families' issue for political purposes, refusing proposals for regular reunions and cancelling scheduled events at the last minute over some perceived slight.

After the last reunion, in February 2012, some South Koreans complained that their Northern relatives had felt obliged to deliver lengthy political sermons parroting Pyongyang's official propaganda.

Others said they seemed more interested in what gifts the South Koreans had brought than in talking about their family history or catching up with the last 60 years.